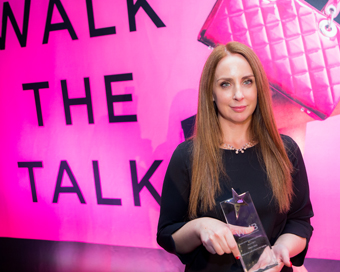 Natalie Walsh has come a long way in ten years from her first role at NUI Galway to her current position of Executive Director of Blackstone LaunchPad, the global campus programme to develop entrepreneurial skills and mindsets using coaching, ideation, and venture creation support. Most recently, she picked up the Boots WMB Empowering Women Award – she is one lady that ‘walks the talk’.

Having worked in management roles in IT sales support, Natalie was looking for an opportunity to return to education. As a single parent, she was looking for a way to juggle work, college and family life and she knew that she wouldn’t have that flexibility in her role at an SME.

When an opportunity came up at NUI Galway Natalie made the decision to take up an entry-level position which allowed her the flexibility to return to college and support her son. She acknowledges that the career change was “a bit of a risk,” but one which “thankfully paid off.”

In 2014 the university was invited to bid to become a Blackstone LaunchPad site. Natalie led the application process and wrote the proposal that secured a €1.3million grant for the college. She subsequently completed a degree in Commerce at NUI and went on to study for a master’s. Natalie is currently studying for a PhD in Philosophy in Trinity College Dublin.

As a role model to other young women and men, Natalie says she has to be mindful of what she says to students and the impact her words can have. An important part of the responsibility of being a role model is to put herself out there, she says. “I wouldn’t be a person who would normally step into the limelight, but I think it’s so important to challenge yourself and put yourself out there because that’s what you want for them, you want them to take the risks and give things a go.”

According to Natalie, students don’t have to have entrepreneurial aspirations to join LaunchPad, as a lot of what they do is personal development, skills development and preparing for the workplace.

Most organisations are looking for people who are creative, innovative, critical thinkers and problem solvers – qualities which are part of the skillset of an entrepreneur.

Speaking about gender issues, Natalie acknowledges that among the student population of 17,000 at NUI Galway, the LaunchPad community has 4,500 members this current academic year. What’s unique about the group is that it’s almost evenly gender balanced, 45% to 55%.

Natalie talks about how lack of confidence is holding young women back. Where a female with 80% of the skills needed for a job won’t apply, her male counterpart with 60% of the skills will apply thinking “I’ll give it a go, I’ve nothing to lose.”

“Girls don’t seem to have that confidence. But we’re working on that; we have seen improvement,” Natalie declares. Last year, she launched a Leading Ladies programme in response to requests by a group of students who wanted help in specific areas, some of which she says perhaps “fully-fledged members of the workforce take for granted.”

The programme has run workshops and talks on how to dress for interviews, networking, and presentations. Multinational Accenture held a workshop for students on business etiquette and professionalism.

In January 2017, Natalie and her team also launched a new programme called LaunchLab which is delivered by students for students with academic support. The first training was in fintech and social stimulation, and she says they had large intake of female students.

Despite a perception that programmes like LaunchPad are solely for business-minded people, arts students can derive huge benefits from the resource. Marketing yourself is very tough to do, according to Natalie. “Learning how to pitch and how to articulate your strengths and differentiate yourself are hugely important” for any career.

Universities are often bound by accreditation, and while students learn the theory and other academic components of their study, the LaunchPad programme can complement those skills to make sure the students are ready to transfer to industry either as an employee or an entrepreneur. Mentors, staff, and alumni are on hand to provide support and advice. “It’s a lot of moveable parts, but they all seem to move well together,” Natalie acknowledges.

Lisa Dillon is looking for 200 talented...

Oprah Winfrey for president? It sounds...