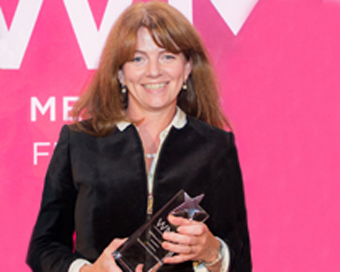 We’re all born of pregnancy, yet the area of perinatal research and medicine is a Cinderella discipline, says Professor Louise Kenny.

Louise Kenny is a Professor of Obstetrics and Consultant Obstetrician at Cork University Maternity Hospital (CUMH) and the Founding Director of Metabolomic Diagnostics. The company is collaborating with University College Cork and the CUMH in the development of groundbreaking predictive pregnancy diagnostics.

The technology, a cumulation of 15 years of research, is the world’s first metabolomic-based early pregnancy screening test for pre-eclampsia. The condition which affects 5% of first-time mothers, is a leading cause of more than 70,000 deaths globally each year and is responsible for around a fifth of neonatal intensive care occupancies. Metabolomic Diagnostics has 10 employees of which five are senior scientists.

Louise has received numerous awards for her work, including the SFI Researcher of the Year Award in 2015. It was the first time the award has been given to a woman and was jointly awarded to Louise and to her INFANT co-founder Ger Boylan

And now she can add the WMB Woman in Technology Award 2017 to her list of accolades!

We interviewed Louise recently for our annual WMB Magazine, in particular focusing on her work with INFANT which we’d like to share with you.  She really is a woman who means business.

The term perinatal, explains Professor Louise Kenny, covers the period from conception through to the baby’s first few weeks of life. It’s a period of time which is crucial for two reasons; the first of which is that the complications that occur during this period to mother and baby account for about 10% of the global disease burden which is “absolutely huge,” she says.

And secondly, as she observes, this period in the life continuum has not just attracted surprisingly little research attention, it also gets a fraction of the R&D funding directed to tackling other, similarly formidable disease burdens.

Contrast, for example, the approach of the scientific community to the HIV/AIDS virus and to the potentially fatal condition, pre-eclampsia, which occurs in the perinatal period.

As a teenager in the early 80s, Kenny recalls, she began to hear the first, isolated reports of the deaths of gay men in the US from a then-unfamiliar disease – HIV/AIDS. Less than four decades later, she points out, science has effectively triumphed over this formerly lethal virus: “We now have a huge array of novel drugs that are effective with AIDS. It is now possible to say that if one has a timely diagnosis, lives in a high resource setting and has access to the right drugs, a person with HIV/AIDS can have a near normal life expectancy.

“That disease was initially a death sentence, and now, just 35 years later – and with a massive amount of R&D funding they have tackled it.”

“In 2017 there is no screening, test, no real care plan for women with pre-eclampsia”.

However, she points out, in the same three-and-a-half decades, millions of women and babies have died of perinatal conditions such as pre-eclampsia (PE), a disease the world has known about for thousands of years – in fact, since the time of Hippocrates, the famous Greek physician who died in 370 BC.

Women are dying, says Professor Kenny, “because we don’t care enough and because there is not enough attention or sufficient R&D spend on this area.”

The dire situation as regards perinatal research is graphically illustrated by contrasting it with how we have effectively tackled AIDS, she says. “That’s not to say that we’ve spent too much on AIDS – but that we haven’t spent enough on perinatal medicine!”

This interview was originally published in the WMB print magazine and has been updated to include Louise Kenny’s award win.

Space Entrepreneur is on a...

Norah Patten’s interest in space was...

Philosophy and the history of art were...