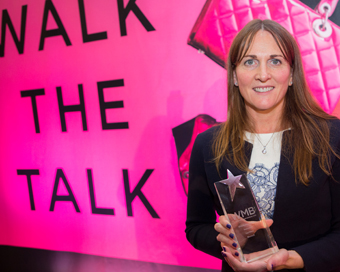 Lisa Dillon is looking for 200 talented new employees at Microsoft Inside Sales to add to the 500 already hired this year at the company’s brand-new EMEA Inside Sales Centre in Dublin.

The Dubliner, who joined Microsoft as MD of its EMEA Inside Sales Centre in July 2016, has overseen a fast-growing workforce, which, by the end of 2017, will constitute a team of 700 people serving customers in over 60 countries and 37 languages.

Lisa herself, who holds an MBA from Trinity College along with degrees in electronic engineering and mathematics from the same institution, is a poster-child for female involvement in STEM – but, she says, when Microsoft started to search the market for potential employees in these pre-sales and solution sales roles, females made up just 12% of the available talent pool. “To me it would be an ideal world if it was 50/50,” comments Lisa who was recently presented with the WMB Businesswoman Award 2017.  It’s yet another sign that we haven’t come far enough since the days when females made up only about 10% of Lisa’s undergraduate engineering class. “Diversity in a team is very important – not just diversity of gender, but diversity of nationality and culture makes for a much more successful team,” says Lisa, who quite literally absorbed this philosophy from her father, an engineer and CEO of a multinational company. He always made a point of encouraging female employees to achieve, she recalls, and he and her mother, a scientist, always placed great emphasis on education. They made no differentiation between the prospects of their sons and daughters (they had two of each.) “My father had a lot of women and men in his workforce, and he made a point of mentoring a lot of women who are very successful today. “He was very encouraging to women,” recalls Lisa, who is a board member of Enterprise Ireland and also holds positions on a number of Inside Sales industry bodies.

As a child, STEM subjects caught her attention:  “In school my favourite subjects were maths, applied maths and science – I loved them,” she says – this was partly because she found them so intensely interesting, and partly, she quips, because there’s always a right or wrong answer in STEM.  After graduating – she got a first class degree in engineering – Lisa landed a job with Andersen Consulting, now known as Accenture, working as a management consultant, starting out in the area of computer programming. It was a superb training ground, she recalls:  “We did a lot of training and a lot of travel – they really provided me with an excellent grounding in everything technical and business.  It was a very good training programme.”  It was a great job, but the ambitious young engineer wasn’t about to let the grass grow under her feet:  “I always had a five-year plan!”  So, after three years in this role she returned to Trinity College full-time to earn an MBA:  “The reason I wanted to do the MBA was because I had a technical degree and I wanted a business degree to complement it.”  During the MBA, she decided that the area of sales and marketing, in which she had had some experience as a management consultant, was now something she really wanted to get into:  “When you’re a management consultant, you’re on site with a client and you have to sell yourself.  “You really get into the mind-set of selling yourself every day. I found that I really enjoyed that.”

At the same time, however, she didn’t want to leave the tech industry, so armed with the MBA she headed to Scotland for four years to work with Motorola’s sales department:  “Mobile phones had just come out. I had one, but none of my friends had, so I had nobody to call,” she recalls. Next up was a period of four years globe-trotting – shuttling between Silicon Valley and various locations around the world, including Asia, with a software start up where she was responsible for worldwide operations and customer services. After that came a general manager role at ESAT Net, a corporate internet service provider, which was later bought by BT:  “I really loved working there; you got a handle on everything.  As general manager of the whole business I was responsible for all the functions within ESAT Net.”  Next stop was Oracle, where Lisa stayed for more than 13 years, working primarily in the Inside Sales area based in Dublin but operating in markets across Europe.

She was VP of Technology Sales at Oracle, and was anticipating many more happy years with the company when Microsoft knocked on her door:  “They approached me and told me they were setting up an Inside Sales Centre for EMEA, based in Dublin and they wanted me to set it up and run it.”  She joined Microsoft as MD of the EMEA Inside Sales Centre in Dublin in July 2016 because, she recalls, of the exciting prospect of setting up an EMEA Inside Sales organisation from scratch. However, she says, she was also enticed by the cultural transformation happening in Microsoft under the leadership of CEO Satya Nadella:  “In this new role, I have had the opportunity to be involved in everything from the design of the organisation, to how many people would be based there, and work very closely with colleagues in the USA,”.   Last February, Lisa, who also holds a Diploma in Life and Business Coaching and a Diploma in Company Direction, formally announced the new EMEA Inside Sales organisation and the creation of 500 jobs. Those positions are now filled.

In recent weeks the company announced 200 more vacancies for presales and solution salespeople, which have to be filled before the end of the year. “We’re looking for people with language skills because we’re supporting countries across EMEA.  They must be native speakers or fluent speakers, and have a minimum of three years’ experience – with some roles requiring more senior people as well.”  And, yes, the lady’s still globe-trotting – she was in Miami when WMB caught up with her – and always learning:  “Every day is about learning something new.  Being part of the cultural transformation in Microsoft and leading EMEA Inside Sales gives me and my team this opportunity every day”

Banking on Claire Lee at...

Natalie Walsh has come a long way in ten...