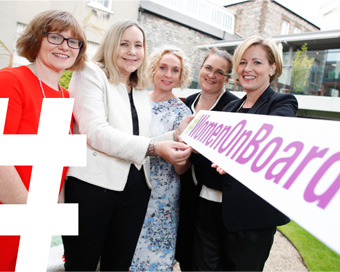 The question of getting more women on boards in Ireland is a long-debated discussion, which, in 2015, resulted in the National Women’s Council of Ireland’s publication, “Better Boards, Better Business, Better Society”.

The case for promoting board diversity is clear and well-tested; it does not need to be reasserted continually. Put simply, more diverse and gender equal boards negate group-think, bring wider business perspective, knowledge and insight – they assess risk more effectively – and in terms of the all-important business imperative, they also deliver increased profit.1 So, why, then, given this considerable and qualified testimony to diversity and gender equality on corporate boards, do we find that (shockingly) Ireland currently only has female representation of c. 16% on corporate boards?

At NWCI’s “Getting Women on Board – Harnessing Women’s Talent in Companies” hosted in partnership with the Norwegian Embassy recently, this was the exact question posited by many of the speakers and audience members. The event, which was chaired by broadcaster and journalist, Alison O’Connor, heard about Norway’s impressive record, which saw a spectacular increase to 40% from 7% female representation following the introduction of a gender quota system.

Orla O’Connor, Director of the National Women’s Council of Ireland, emphasised that without quotas, the pace of change in Ireland is far too slow. The NWCI welcomes the commitments in the Government’s National Strategy for Women and Girls to commission an independent review of women’s representation in governance and senior management in business as well as an implementation plan to promote women to senior leadership roles. The organisation is also calling for a national action plan on this issue and for quota legislation to be introduced in Ireland to increase women’s representation on company boards.

However, both Norwegian Ambassador Else Berit Eikeland and guest speaker, business lawyer, Liv Monica Stubholt noted the necessity for political will in driving change of this nature. The decision to introduce board quotas in Norway was championed by a Conservative, male Minister – not necessarily the most obvious advocate for such an initiative.

The unintended and rather interesting consequences of introducing a quota system such as Norway’s? Better quality candidates – across the board. The eradication of the “who you know” selection approach was testing people on talent, and skills, not simply their closeness to the decision-maker. In fact, Liv Monica also noted the discussion widening in the selection process to a changed language, where “parenting responsibilities” and other personal issues were no longer postulated as key considerations – and if they were, the question was asked, “well, would you say this about the male candidates?”. A radical and important shift in thinking.

This interview was originally published in the WMB print magazine. You can buy your digital copy here.

New research by Accenture Ireland and I...

Moving at a Snail's Pace on...