Space Entrepreneur is on a Mission for STEM 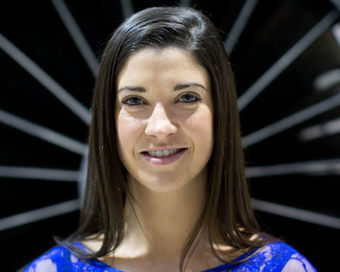 Norah Patten’s interest in space was sparked at the ripe age of 11, when she visited the NASA Lewis Research Center, now called the Glenn Research Center, near Cleveland, Ohio, during a family trip to the United States.

After that trip, Norah who grew up in County Mayo, got really interested in the early manned missions, like the Mercury 7.

“We got to see the capsule that they travelled in, and it’s just this tiny little thing, and you just think ‘wow like it’s so small’. And it’s amazing that they’ve made so many advancements since then,” she says.

Four years later her dad took her to the Kennedy Center in Florida, and she was “blown away” by the exhibits and life-sized replicas of rockets and spacecraft.

She was particularly impressed by the Saturn V Rocket and remembers thinking at the time that “this is definitely what I want to be doing”.

For Norah, who studied aeronautical engineering, what’s really exciting about modern space travel are the commercial opportunities. “It’s not just now governments that are involved in space; it’s companies, it’s research institutes, it’s kids being able to send their experiments up, I think that, for me, is the really exciting thing that’s happening now.”

NanoRacks, which has facilities on the International Space Station, is one of those companies, and as part of its DreamUp organisation, it gives students opportunities to design an experiment and test it in space. Norah, who is a faculty member of the International Space University, was working at the University of Limerick’s Centre for the Irish Centre for Composites Research when she launched a national competition looking for entries from transition year students to the NanoRacks competition.

Hundreds of students signed up and submitted abstracts and the winning team from St Nessan’s Community College in Co. Limerick had their project, investigating the effects of microgravity on the solidification of reinforced concrete launched on the Orbital Sciences Orb-2 mission to the ISS in 2014.

This summer Cork Institute of Technology was chosen as host for the International Space University’s Space Studies Program (SSP). The nine-week course, which includes workshops, lectures, and team projects, attracts applicants from across the globe, with a broad range of ages, nationalities and professions. There’s a minimum requirement of an undergraduate degree, but an engineering background is not mandatory, and among the 110 participants for the nine weeks, there are architects, artists and musicians.

A previous participant in the SSP, Norah cites Eileen Collins, the retired NASA astronaut, as a hero. Having spoken about her goal of becoming Ireland’s first female astronaut a few years ago, space travel is still in Norah’s sights.

And she’s under no illusions about the level of commitment involved. Recently a friend from Canada made it through to the top 16 in an astronaut selection from an initial 5,500 qualified applicants. After selection there are two and a half years of training, and then there’s a wait to get on a flight. “It’s a lifetime thing really,” she says.

Norah completed her scuba training recently and has become the first Irish candidate to be accepted onto the Scientist and Astronaut programme, Project PoSSUM taking place this October at Embry-Riddle Aeronautical University in Florida. Scuba is an essential part of training to become an astronaut, she says. Nasa astronaut Dan Tani, who is in Ireland this summer as part of the CIT programme, told her that the closest thing that he’s experienced to a spacewalk is “scuba diving when you’re upside down, and you’re floating”.

Her passion for all things galactic led her to set up STEM products brand Planet Zebunar in 2015. During the space experiment with the transition years for NanoRacks the previous year, she saw the impact it had on the students, and she thought there’s really an opportunity “to do something bigger and more sustainable that can reach loads of kids and that can grow.”

Unimpressed by the STEM products available on the market, she decided to design a range herself to get kids interested and excited about STEM.

Working with a team in IADT in Dun Laoghaire over two summers using focus groups comprised of teachers, game developers, psychologists, parents and children, they developed the first products, which are a storybook, comic book and an augmented reality app.

She says the days of the pink Legos are over and she wants Planet Zebunar’s products to be inclusive rather than gendered. “I’m going to do something that inclusive of girls and boys and try and diversify it so have different types of characters in there.”

Norah says that instead of asking how can we get children more interested in STEM, we should ask how can we diversify STEM in general. Citing a 2013 report by the US National Science Foundation, which showed that over 50 percent of those working in science and engineering occupations were white men, she says the statistics are still “kind of shocking”.

The Planet Zebunar product, which is aimed at seven to 10-year-olds, with a younger version in the works, is due out in September. As Norah says: “Watch this space.”

At the Chef’s Table with...

We’re all born of pregnancy, yet the area...