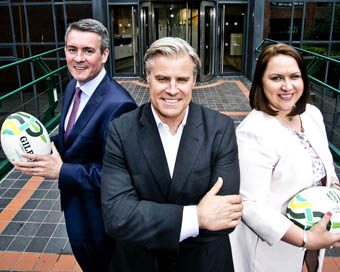 Over the past few years, women’s rugby has enjoyed unprecedented growth and the inclusion of rugby sevens in the Rio Olympic Games in 2016 has helped establish the sport in new markets. Today, women’s rugby is played by nearly 2.2 million women and girls in more than 110 countries.

Mike McKerr, Managing Partner for EY Ireland, said: “Building the highest performing and diverse teams is core to our success in EY and, when it comes to leadership, teaming and developing winning strategies, there is a great deal to learn from professional sports people. By supporting the highest performing teams in the sporting arena, as exemplified by the Women’s Rugby World Cup 2017 along with the EY Hockey League, we hope to expand on our own strategy to inspire effective and engaged teaming while promoting the importance of diversity within our firm”.

Tara Lillywhite-Torpey, EY Assurance Partner, says: “Professional sport is a powerful metaphor for business. Facing fierce competition, building effective and diverse teams, while developing both long and short term strategies are just some of the key areas where business and sport overlap.  A recent report commissioned by EY shows that investing in D&I pays dividends – companies with a D&I strategy not only have enhanced reputations but they also report even higher sales revenue and profit margins. This makes it even more critical that businesses develop and implement a D&I strategy that works for them, otherwise they will pay the ultimate price and fall behind the competition”.

Women for Election is calling on Taoiseach...