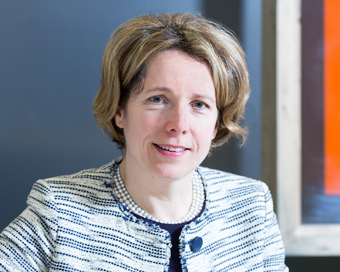 Having taken over Bord Bia last January, it’s fair to say that new CEO Tara McCarthy will have her work cut out as she tries to keep the Irish food industry thriving in an uncertain international environment. She speaks to WMB as she settles in the role she took up at the start of the year.

With Brexit looming, the West Cork woman is at the forefront of what she calls a “data driven” approach to figuring out what the next steps should be for the Irish food industry.

Growing up in Clonakilty, McCarthy’s family bought fish at the quayside and eggs from local farms. Her father was principal of the local community college and, like two of her siblings, she was initially headed for the classroom, but her interest in commerce took over and she completed an MBS at Smurfit Business School and has also studied at Harvard.

She has worked with Bord Bia for over two decades, spending much of that time overseas after completing the European Orientation Programme. “How the programme was structured at the time was helping the Irish industry in general look towards the opportunities for exports and then helping young people get languages to facilitate that journey,” she explains.

The food industry was the biggest beneficiary of that programme and while McCarthy initially entered it to work in exports generally, food was where she found herself thriving. Now, she’s brought the expertise gained abroad home to the businesses that need it.

“I was fabulously lucky by spending 10 years overseas in two different markets and that gave me a really solid grounding and training in understanding that the market comes first.”

She believes that understanding the consumer’s ethos and behaviour by walking in their shoes is the major advantage of working abroad. McCarthy can‘t speculate as to whether her experience in Europe was a deciding factor in her appointment, but it can’t have hurt.

Although currency volatility has already occurred as a result of the decision (adversely affecting the mushroom industry in particular), Brexit is starting to move into the next phase, she says, with commercial decisions starting to be made. It is “the biggest single issue for the food industry in all aspects,” she says.

“We have a Brexit meeting every single week here in Bord Bia, that’s a cross-divisional group chaired by myself and that looks at all of the different risk factors that we’re facing. During the month of March we also launched a Brexit barometer to get a much better feel for the pressures our customers are facing and we worked through with our clients over 100 different questions in 100 different areas they felt were at risk for them. That ranged right through supply chain, currency concerns, innovation concerns, labour concerns, knowledge of tariffs etc.”

Bord Bia is now analysing the data gleaned from that process, in terms of market prioritisation, increasing its presence in discussions with UK customers and understanding customers worldwide.

“One of the consequences of Brexit is that it has probably increased the appetite of companies within the food industry to jump out of the UK faster than they otherwise might have done so,” explains McCarthy.

China is Ireland’s second biggest market for pork and dairy, while negotiations for beef access are ongoing. New Bord Bia offices have opened in Warsaw and Singapore within the past year “to ensure that our people are in the right places to do the right business,” while a complete market prioritisation analysis is about to go out to tender, ensuring that Irish producers are focusing on the right markets.

“It’s very challenging, there’s a lot of moving parts and it’s very complex. There’s a lot of change going on and we’re embracing that change, there’s no point hiding from it. We want to position the organisation as being ready, agile and up for whatever challenge awaits us,” explains McCarthy.

Throughout her career, she has worked with people “who do things brilliantly” and this has hugely influenced her.

“It really stretches you, shows you the importance of planning, having ambition and being brave.”

McCarthy is a firm believer in giving back and sits on the board of children’s charity Blossom Ireland. She’s also an advocate for women in agribusiness and the food industry.

“We would love to have more women in the industry, it’s a priority for us. We did a women in agribusiness event recently and it’s something we will be pursuing, to make sure we can get as many women as possible to achieve.”

Life at the top of Bord Bia is challenging, and she acknowledges that she’s luckier than most women, with a husband who stays at home.

“I’ve been very lucky to have absolute freedom to adjust to the new role… behind every woman is a great guy and it’s a phenomenal asset to have that.”

Her advice to women embarking on their careers? “Be ambitious, work hard, believe in yourself.”

It’s been 40 years since Colette Twomey...

At the Chef’s Table with...