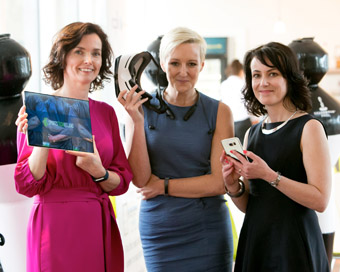 Between them they’ve been involved in more than 10 start-ups, raised business investment and bought and sold companies.   And between them, they’ve also participated in eight business accelerator programmes over the years.

The initiative has partnered with a number of international organisations to help position Ireland as a global destination for SportsTech companies and is working with the IDA to attract international SportsTech companies to the Midwest.  “In a nutshell what we’re trying to do is promote Limerick and the Mid-West as a hub for SportsTech in Ireland,” Gráinne explains, adding that they originally launched the company because of the excellent impact they believe it will have on the economy in the region in general.

SportsTech is an umbrella term for any kind of technology used in sports – it covers everything from a Fitbit to player analytics to fan-engagement apps.  “What we’re essentially doing with SportsTech Ireland is creating an eco-system for SportsTech innovation in the mid-west,” Gráinne explains.  On June 15th the group launched SportsTechIreland and announced its first entrepreneur-led accelerator programme for start-up businesses, companies, or entrepreneurs with an idea for a SportsTech related service or product.  They issued a call for applications from interested entrepreneurs or companies to participate in the six-month initiative, which kicks off for the first time next October in Limerick city with nine participants.

Of these, three will be selected from the area of rugby, and three each from the sports nutrition, and general SportsTech sectors.  Successful applicants will be mentored by a hand-picked panel of 30 seasoned entrepreneurs from the SportsTech or tech fields.  These experts will give of their time and expertise to road-test the ideas being put forward by programme participants. Explains Emily Ross, Tech PR specialist and co-founder of SportsTech Ireland:  “We’ve been working hard over the past year connecting the dots.  “That means reaching out to athletes, coaches, educators, innovators and entrepreneurs to build a network that supports the sharing of ideas, experience and research.

“SportsTech hubs in Tel Aviv, Paris and Berlin are leading the way, and with their help, we are taking what works to create the best possible ecosystem here in Ireland.  “We have signed a number of agreements with Accelerator Programmes around Europe and are working hard to position Ireland as a destination of choice for international SportsTech companies through these partnerships. “Applications to join this first SportsTechIreland accelerator programme will be accepted from interested companies and entrepreneurs up to August 1st.  A specialist panel of academics, and sports and technology experts will select the nine participants for the programme which will be based in a dedicated space in Limerick city.

The group plans to run two programmes annually.  Limerick is an ideal site for such an initiative – it has always had very strong links with sports through its status as a rugby and rowing hub, and also through its sports-related third level campuses in the city – the University of Limerick and Limerick Institute of Technology. On top of all of that, the city won the accolade of European City of Sport in 2011.  Put it this way, says co-founder Martina Skelly:  “Sports technology is a fast moving vertical with massive evolutions in everything from wearables, to player analytics, to sports performance measurement.  “Our research indicates that the market will be worth over $113bn by 2021.  “Ireland is perfectly positioned to be a gateway for SportsTech companies in the US, and to drive growth, both indigenous and from abroad, through the creation of a strong support network on the ground.”  Now who could honestly argue with that?

In recent years there has been a growing...