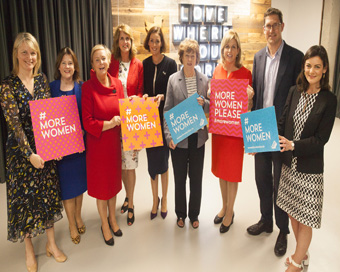 Women for Election is calling on Taoiseach Leo Varadkar to provide matching government funds after its successful crowdfunding campaign raised €56,000 to subsidise training 300 women ahead of the 2019 local elections. Women for Election Chairperson Michelle O’Donnell Keating wrote to the Taoiseach to thank him for his personal donation to the campaign and to seek government support.

“We are heartened to see your support for our organisation and its mission to inspire and equip women to succeed in politics. We are pleased too to learn of your intention to increase the number of women parliamentarians within Fine Gael after the next election, and very much hope that we can work with you in achieving that,’’ she said.

The #MoreWomen crowdfunding campaign – run by a team of volunteers with practically no budget – aimed to raise €50,000 to provide subsidised training to 300 women before the 2019 local elections. It surpassed its target and finished with a grand total of €55,927 raised from 822 backers.

O’Donnell Keating said the funding would allow Women for Election to provide introductory training to 300 women, but that the organisation could do more if matching funds were made available by government.

For example, matching funds would enable Women for Election to increase the number of full scholarship places on its programmes ahead of the 2019 elections, provide structured support, events and networking opportunities for elected women at council and Dáil level including in-camera exchanges with international politicians, masterclasses on specific social media platforms and training for particular roles such as chairing committees. It would also enable the organisation to provide training at University level to encourage more young women to contest elections within Student Unions, Clubs and Societies.

Women for Election has a strong track record of providing practical support to inspire, equip and inform women entering politics. Since establishing in 2012, Women for Election has trained more than 1,000 women to take the next step on their political journeys. Of the 194 women who secured seats in the 2014 local elections, 50 per cent had undertaken Women for Election training, while in the 2016 General Election, 40 per cent of the newly elected women TDs had been through the programmes.

“Our cross-party model is innovative internationally, and has been profiled numerous times at European level as an example of good practice. We want to increase our impact in this electoral cycle, with your support. Fine Gael is the party in Government that has done most to promote women’s political participation. The 2012 gender quota legislation was a game-changer, and something your party should be very proud of. We are asking you to build on this by providing match funding to Women for Election to deliver on our mission in the electoral cycle leading up to 2019,’’ O’Donnell Keating wrote.

EY has recently announced its official...