At the Chef’s Table with Danni Barry 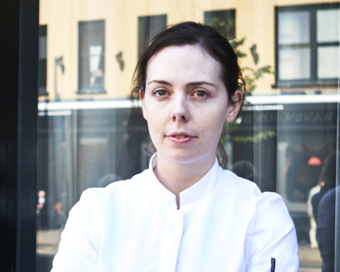 She’s just turned 32, and already Danni Barry is at the top of her game. The head chef at the Michelin-starred Deanes Eipic Restaurant in Belfast recently received the accolade of best chef in Ireland at the Irish Restaurant Awards.

Growing up in the village of Mayobridge in County Down, Danni and her sister would watch Ready Steady Cook after school and learn to make custard or a white sauce from scratch. “It wasn’t fancy food; it was home-cooking,” she says.

Danni’s first “fell in love” with the buzz of the kitchen when she took a part-time job washing pots at a local restaurant while studying for her A-levels.

The then 15-year-old was saving up to buy a car, and as she worked more hours, she took on more responsibilities and eventually became a commis chef.

Although she had this early interest in food, it was, however, the industry that drew her in. “As you learn and you train, your passion for the food side itself and for the produce and ingredients comes over time,” she says.

After a year at catering college in nearby Newry, she joined the team at Deanes Restaurant in Belfast, spending a few years there before leaving to travel.

For Danni, the creative side of being a chef is a big part of the appeal. “You come in the mornings, and it’s just all raw materials and then by seven or eight o’clock that evening you’re plating up these complete dishes. That really appeals to me, to take something right from the beginning to completion and then you do it again and again.”

She loves the sense of comradery of the kitchen. And although she has mostly worked in male-dominated kitchens, these days, turning the stereotype on its head, Danni is at the helm of an all-female team at the Eipic.

Kitchens have changed in the past decade, Danni says. “They’re now a lot more collaborative. While females are still not seen in many senior positions, she says, “we’re definitely getting there.”

The physical toll of the kitchen drives many chefs to take a step back from the day-to-day service, as they get older. Early on Danni was told that chefing is a “young person’s game.” Spending “14 or 16 hour days on your feet is not easy for anyone,” she says. Women, in particular, find it challenging to balance the long hours with family commitments, and Danni says the industry needs to change to encourage more women to stay, regarding more flexible working hours and proper cover for maternity.

She is proud of the recognition of her work and in particular that the recent award was not in a gender-specific category. “It’s lovely to get recognition, especially amongst your peers,” she says. “To be able to stand there and have a roomful of chefs, and for them to say ‘fair play, Danni’. You’ve been awarded for your talent or achievement, and I’m proud of that.”

Commenting on criticism of the Restaurants Association of Ireland’s all-male cookery panel at the recent awards ceremony, Danni says she doesn’t think it is reflective of the hospitality industry, which is a “melting pot” of diversity.

The 32-seater Eipic restaurant, which has a tasting menu of seven or eight courses, serves dinner four days a week, and lunch on Friday. The menu is led by what’s in season, Danni says. She brings influences from her time travelling in Australia, South Africa, and Europe to her creations. During a year in Spain working on a yacht, she went to the market every day to buy produce. These days she buys fresh whole fish for the kitchen at Eipic and makes sauces the Spanish way, getting “lots of flavour out of the base of the stock.”

Danni likes to eat out, and she uses social media to keep up with trends in the industry. While she says it’s great that there is so much information out there, Twitter and Instagram can be a distraction. “You need to find your own style. Go with flavour first and use the best produce available to you”.

The way customers use social media to interact with their food is another thing that has changed in the industry, and something Danni takes in her stride. “It’s very popular now, people taking pictures of their food and posting them before they’ve even lifted their cutlery. I think it’s a gripe most chefs have because you know you’ve sent it out when it’s at its absolute best. It’s not supposed to sit. But that’s the world we live in.”

The debate over whether or not there is an Irish cuisine is an ongoing one. Danni thinks Ross Lewis from Chapter One in Dublin and Enda McEvoy in Loam Restaurant in Galway have it right, because of the way they use Irish produce, that is “cooked with some level of tradition but in a modern way and at an international standard.”

Space Entrepreneur is on a...

Norah Patten’s interest in space was...