Women for Election Draws the Crowd! 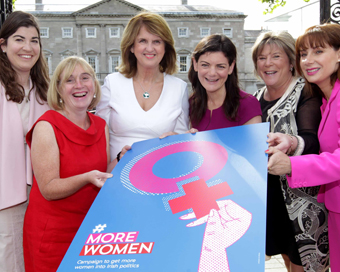 There have been more Seáns and Johns than women elected to Dáil Éireann, according to an analysis of all TDs elected since 1918. There were 99 Johns and 31 Seáns elected over the last century compared with just 114 women, according to the analysis for Women for Election.

Of all the people ever elected to the Dáil since the foundation of the state, only nine per cent were women, while 91 per cent were men. That is according to Caroline Kirrane, Adjunct Lecturer at Trinity College Business School who analysed the data.

The campaign is being launched this evening (Thursday 15th June) at an event hosted at Twitter’s headquarters in Dublin followed by a discussion with a panel of high-profile politicians.

The campaign has already raised 30 per cent of its funding target after going live this morning.

Women for Election Chair Michelle O’Donnell Keating said: “Thirty-five women were elected as Members of the 32nd Dáil, an all- time high. Yet, women account for just 22 per cent of TDs and 30 per cent of senators. We are taking early steps to put in place the funding to train women considering entering political life so that they are ready to run in the next local and general elections.’’

Today’s launch marks five years since the organisation was founded in 2012. Since then, Women for Election has trained more than 1,000 women to take the next step on their political journeys.

Women for Election has a strong track record of providing practical support to inspire, equip and inform women entering politics.

Of the 194 women who secured seats in the 2014 local elections, 50 per cent were trained on Women for Election programmes, while in the 2016 General Election, 40 per cent of the successful newly-elected women TDs had been through the programmes.

Women for Election co-founder Niamh Gallagher said: “Our experience is that people really want to see more gender equality in Irish politics. This crowdfunding campaign gives everyone the opportunity to help achieve that by contributing to the work Women for Election does inspiring and supporting women to take the first step and make a difference in politics.”

An initiative to support female...