In the Hunt for a Solution at Ostoform! 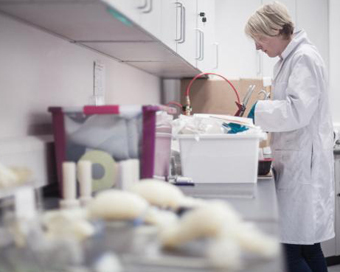 Like so many successful products, Ostoform’s genius lies in one thing – meeting a simple, but un-met need.  However, as with every stroke of genius, there’s been a lot of gruelling work and detailed preparation behind the promising medical device which has been developed by Roscommon native Rhona Hunt and her business partner Dr Kevin Kelleher to manage skin complications for people with ileostomies.

Despite the fact that their fledgling company Ostoform was formed by the duo just last autumn, the company has already been making waves in the medical community. Our business-minded pair met in 2013 while they were both studying for a Master’s Degree in Bio-innovation at the University of Limerick.  Rhona had worked for several years in the medical devices design sector prior to returning to college fulltime in 2013 to earn her postgraduate degree:  “The idea for the company originated in our Master’s Degree programme, during which we studied gastro-enterology.  “Through this route we were immersed in clinical practice for some months”.   During their research Rhone and Kevin recognised a strong need to help people experiencing skin issues associated with ileostomy.  An ileostomy involves – for example in the case of a patient suffering from inflammatory bowel disease or bowel cancer ­– the re-direction of the small bowel onto an opening on the surface of the abdomen, known as a stoma.  In such cases, the bodily waste must be collected in a special bag, which is placed over the stoma, and attached to the skin.

Our hard-working scientists developed a product which keeps the skin healthy by ensuring that output from the small bowel does not come in contact with the skin.  Rhona elaborates:  “Ostoform is like a special seal that is put around the iliostomy preventing any leakages.  “When leakages happen on the skin in this situation it is acidic and can damage the skin.  “The acid literally burns the skin and results in a condition called chemical dermatitis.”

About 40% of patients with an ileostomy experience this condition as a result of leakage. In 2015, Rhona and Kevin received support in the form of commercialisation funding from Enterprise Ireland, which helped them develop their product in collaboration with clinicians and patients.  “We also received solid support from the University of Limerick in the form of accommodation and mentoring.”  They set up the company in October last year and have since garnered an impressive array of awards, starting with the InterTradeIreland Seed Corn ‘Best University Spin Out Award’.  They also won ‘The One To Watch’ Award under the Enterprise Ireland Innovation Showcase 2016, while their most recent prize was through the AIB Start Up Academy just last April.  They are currently fundraising in order to begin manufacturing the product next autumn, and to apply for the relevant approvals in Europe and the USA prior to formally launching the product next April.  “We’re getting very good feedback from the medical community; we’re receiving encouraging feedback particularly from stoma nurses and also a very good response from patients,” says Rhona.  After thorough testing, the team are satisfied the product is clinically efficacious. This product has the potential to really improve quality of life for patients. Now that’s a vision worth pursuing.

Imagine getting the opportunity to...

It’s been 40 years since Colette Twomey...