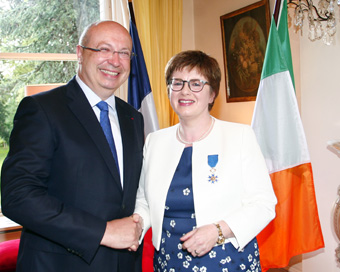 Margot Slattery, country president of Sodexo Ireland, has been named Chevalier de l’Ordre National du Mérite by Mr Jean-Pierre Thébault, the French Ambassador to Ireland, at a ceremony at the French Residence on Ailesbury Road on Thursday 8th June 2017. It is bestowed to reward distinguished civil and other achievements by French citizens and other nationalities.

Speaking at the event, Ambassador Thébault said, “France is proud today to recognize not only a leading businesswoman and a key player for France-Ireland relations but also a woman who is actively engaged for the service of all and who strives in promoting diversity and inclusion both in the industry and in the community.

As country president, Margot oversees the company’s divisions operating in Ireland, which includes corporate services, sports and leisure, education and universities and government services. Her role in promoting diversity and inclusion as well as promoting the role of women in business has been regularly recognised by her peers in the industry. Margot won a Trailblazer Award at the 2016 WXN Most Powerful Women in Ireland Awards and Sodexo appears on the 2016 Top Ten Best Places to Work for LGBT Equality in Ireland. She was named Image Magazine’s CEO of the Year for 2016 and Irish Tatler’s 2016 Businesswoman of the Year.

Margot is also involved in the promotion of France-Ireland relations and has played an important role within the France Ireland Chamber of Commerce.

Margot said: “I am truly honoured to be made a Chevalier of the Order De Merit and will be very proud to fulfil all the obligations that accompany such a prestigious award. I work for an inspiring French organisation that places people at its very heart. Sodexo has helped me to fulfil my own potential, to be an active member of my community and to participate in making social changes for the better. They have always encouraged me to facilitate change and improvement wherever I can and I look forward to continuing in this vein.”

Women for Election Draws the...

There have been more Seáns and Johns than...

HookeBio is One to Watch!

Finola Cliffe of HookeBio was presented with...