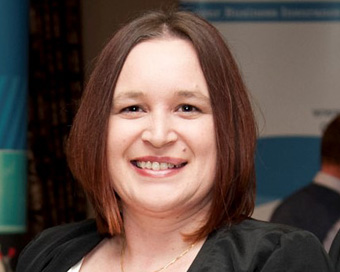 Imagine getting the opportunity to ‘live’ through the sinking of the Titanic or experience the Apollo 11 moon landing. A newly-fledged Waterford company, Immersive VR Education Ltd, is making waves around the world with its drive to promote student learning through pioneering Virtual Reality ‘lessons’.

The establishment of a thriving company, the creation of 17 jobs and the launch of entirely new careers for Sandra Whelan and her husband David stems from one of those ‘once-in-a- lifetime’ light bulb moments, which started with a Virtual Reality Oculus Rift headset.

At the time Sandra was working in telematics, while her husband David had a successful web design company. Their new journey began 3 years ago when David, an enthusiastic gamer, invested in the Virtual Reality headset.  Although the device held little attraction for Sandra she was encouraged to give it a try. A mother of three, Sandra found herself spell-bound by the device and immediately saw the potential of the experience which was a colourful tour of the Solar System called Titans of Space. “It brought you right up to the different planets,” she recounts. “My mind was blown – it was my first time using Virtual Reality.”

The couple watched on as their children gave it a go: “They found it so fascinating. They seemed to learn an awful lot from it,” she recalls. Even after they had finished the tour of the planets, they remained very excited by and interested in, the solar system. Intrigued by the educational potential of this whole new sector, Sandra and David began to review non-gaming VR content, and established a website on which to publish their thoughts.

The site, and the reviews, attracted attention, and through the website, David gradually became part of a network of top-flight VR developers. A few months later, he decided that he’d like to create an Apollo 11 mission, recounts Sandra, “as a sort of VR experience for both children and adults.” With the help of a top-notch developer in the US, he started work on the project. The idea attracted support from the local enterprise board and before long, David took the giant step of selling his company and joining Enterprise Ireland’s successful New Frontiers entrepreneurs programme, which supports the development and launch of innovative start-up businesses.  It was an exciting though somewhat anxious time for the couple.  In 2015 Sandra left her job in telematics, and a year later, the couple launched the Apollo 11 VR experience through their company.

The launch was a massive success, winning a string of international awards and encouraging the dynamic duo to develop another spectacular Virtual Reality programme or ‘lesson’, Titanic VR. This application allows users explore the shipwreck of the RMS Titanic and watch the tragic events of 1912 unfold from the viewpoint of a survivor.  The experience which is nearing completion will be split into two sections – an underwater exploration game, due for release in early to midsummer, and an historical cinematic experience, expected to be launched before Christmas.

The workforce at Immersive VR Education has now hit a very solid 17 staff, and Apollo 11, which is available on Playstation and Oculus Rift among others, is selling well. The company has attracted programmers from all over the globe, who are very interested in working specifically for it, says Sandra proudly: “One programmer came from California to Waterford to work for us,” she says, adding that several developers interested in VR have also upped stakes from the UK to join the dynamic Waterford firm: “The company is growing. We can offer stable employment and an exciting and rewarding career,” she mentions.

Most recently, Immersive VR Education raised over €1 million in investment – The fundraising round, which was led by Kernel Capital will allow the company to embark on a fresh round of recruitment to fill development and technical roles with plans to increase its staff to 30 by year end. In addition, the company is one of 9 start-ups nominated for this year’s Enterprise Ireland, HPSU Founder of the Year Award.

VR is an emerging industry – and Immersive VR Education is at the very forefront of this new phase: “In a few years, take-up will be phenomenal and VR will see substantial growth. People are very excited about it,” Sandra declares. The company has also created its own platform, ‘engage: “This allows educators to go on to our platform and create their own VR experience,” she explains, adding that essentially the platform allows teachers to create their own VR lessons. Virtual reality is an emerging industry, and, thanks to Immersive VR Education, the benefits both inside and outside the classroom should be vast.

Although there is over 1000 years recorded...

In the Hunt for a Solution at...