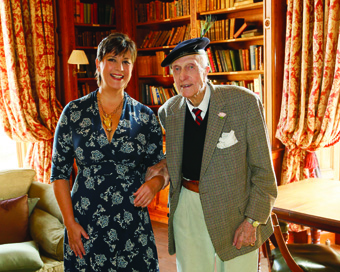 Although there is over 1000 years recorded of Leslie family history, this month (10th May 2017) marks the 25th anniversary of Castle Leslie Estate operating as a thriving business. The last quarter of a century has seen the estate regenerate from a leaking seasonal Tea Rooms with a handful of part-time staff to the current operations with a team of over 140 at the end of the season.

The 1000-acre Castle Leslie Estate is one of only a handful of Castles and Estates in Ireland still home to its founding family. When asked about the last 25 years, Sammy Leslie reflects: “Our family’s ethos has always been one of creativity and curiosity, openness and sharing, of innovation and entrepreneurship, of sensitivity and working with, of involvement and teamwork…it is my great honour to be the one tasked with bringing a unique and important part of Ireland’s living heritage through to the future.”

The original dream for Castle Leslie Estate – great horses, good food and good old-style hospitality is flourishing. And with over 30 National and international awards under her belt, Sammy’s ambition to bring the Estate back to life, gain sustainability through tourism and work symbiotically with local communities continues to unfold. Her desire was to restore the Castle in the style and manner it was built to enable guest entertainment on a grand scale.

Funding was supported by a grant of 5k from Monaghan County Enterprise Board, (now LEO).  Sammy didn’t have the matching 5k to be able to draw down the grant so she sold her Fathers car, to gather up the matching money.  Later that year Castle Leslie went on to win at the National Enterprise Awards!

With the roof mended between 1995 and 1997, Sammy could now refurbish fourteen of the Castle bedrooms and bathrooms, each in its own unique style, in an effort to maintain the individuality and uniqueness of the property. Dinners were served by candlelight in the original dining room, just as it had been in the old days, with pre-dinner drinks served in the Drawing Room or Fountain Garden.

Two years later, after 20 years in external ownership, the Estate’s Equestrian Centre and Hunting Lodge were re-purchased. Having secured euro cross-border funding, Sammy set about restoring and regenerating the Castle at Castle Leslie Estate. The redevelopment of the Long Gallery Wing in the Castle enabled the Estate to offer business and corporate facilities. The addition of six further guestrooms brought the room total in the Castle to 20.

With 78,000 square feet of historic buildings, miles of famine wall and the Hunting Lodge back in the fold, funding was sourced for reinvestment in the Estate. Inspired by Poundbury, the town Prince Charles built in England, Sammy Leslie worked with a team of Irish architects to extend the village of Glaslough back over the Estate where it had been, prior to a fire in the 1850s. A seamless extension to Glaslough village, the Village Cottages and houses are built around a Village Square and Green.

Sammy wanted to ensure that the development would be sympathetic to the current style of the existing village so she called in specialists in conservation, heritage and architecture to design the development. All proceeds from the sale of the houses were re-invested to fund the continual regeneration of the Estate.  Local residents and Estate Team were given a chance to purchase a home two weeks ahead of the market to ensure as many houses as possible were retained locally.

Located at the gates of Castle Leslie Estate, the Hunting Lodge and Equestrian Centre underwent extensive refurbishment and renovation before re-opening in May 2007. Both had been in the Leslie family for many years until 1984 when Desmond Leslie sold them. It was in the midst of the Irish troubles and his daughter Sammy had just qualified as an intermediate instructor. Undeterred, Sammy set up a yard in the old Estate farm buildings. Here Sammy bought, sold and broke horses until 1987, vowing to re-purchase the Hunting Lodge when she could. She achieved her goal in 2004.

In January 2006, work started on the multi-milion refurbishment to expand and improve the existing facilities – the 29-bedroomed Lodge and the new state-of- the-art Equestrian Centre. The project was supported by grant aid and part-financed by the European Union under the National Development Plan 2000-2006, administered by Fáilte Ireland.

But never one to rest, Sammy has already identified a number of future projects including the restoration of the Formal Walled Garden and the location of the successful Monaghan exhibition to the gardens gate lodges among other projects. We wish her well.

Once upon a time when you left a job, they...

Imagine getting the opportunity to...