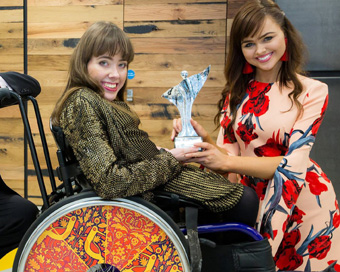 The start-up space is growing year on year, with new companies serving a range of mainstream industries, such as food, consumer goods and financial services. However, if a freshly-minted business wants to stand out from the crowd, they need to have a unique and innovative idea.

We talked to two ‘bright sparks’ behind these innovative new companies.

Izzy Wheels founder Ailbhe Keane knew she hit on a potentially huge market when she started getting messages on Instagram about the wheelchair covers she had designed for a college project.

Inspired by her fashion-loving younger sister Isabel, who was born with Spina Bifida, she chose the brief “To empower the lives of people living with a long-term health-related condition” for her final course assignment for NCAD.

“I thought of Isabel because when she was younger, she loved to dress up her wheelchair for special occasions. “I created Izzy Wheels so that my sister and other wheelchair users had a way of expressing themselves.” After posting photographs of Isabel modelling the wheel covers on Instagram, Ailbhe got messages from parents saying: “my kids would love these, where can I get them”. Ailbhe, now 24, was at first daunted by the prospect of starting up a business. “My background is design, and I was like ‘am I ready for this?”. She approached Enterprise Ireland with her idea, and they gave her support, in the form of mentoring, an office and funding, which she says was “brilliant”.

Isabel, who is studying sociology and politics at NUI Galway, is the company’s brand ambassador. “We’re a good little team, I’ve got the design end of things, and Isabel has the first-hand experience, and she has so many contacts.”

The spoke guards, which are made from a soft plastic, and secure with velcro at the back, come in three different sizes, to suit children, teens and adults. With 40,000 wheelchair users in Ireland, 640,000 in the UK and 14.5 million wheelchair users across Europe and the US, “this is the world’s most underserved community of people in terms of fashion,” Ailbhe says.

While the colourful designs appeal to females, Ailbhe says they’ve had lots of requests from males for football wheels or sports teams.

Izzy Wheels has collaborated with other artists to appeal to a wider age demographic with a portion of the proceeds from the collections going to a disability charity.

For the “Roll Models” collection, Irish artists and illustrators, such as Chris Judge, Peter Donnelly and Paula McGloin, created designs “to prove that a wheelchair can be a work of art,” Ailbhe says. For the next collection, which launches on June 1st, there’s a mix of landscape, graffiti and illustrators. Ailbhe says she’s had interest from designers from all over the world asking if they can mak

e a design, which “shines such a good light on disability.”

Izzy Wheels recently won Accenture Leaders of Tomorrow and took 2nd runner-up at the finals of the AIB Start-up Academy. Isabel had her own star moment when she heard that Chris Judge had put her at the centre of a large-scale mural of Irish inspirational people that he is working on in the Dublin Docklands. 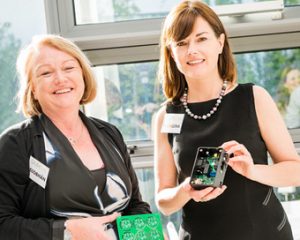 Another company thinking outside the box is Mint Tek Circuits. Georgina Kearney (pictured right) and her Mint Tek co-founder Siobhan Ní Chófaigh met during their MBA at UCD’s Smurfit School. Siobhan, whose background is in electronics, knew from working with hardware development engineers that a lot of time was taken up with sourcing prototypes.

“So she had the idea of doing the procurement on their behalf so that they could focus on what they’re good at,” Georgina says.

Describing Mint Tek as “essentially a brokerage, but on a more global level”, Georgina says their business leads come from Siobhan’s contacts, social media and through their partnership with components supply company, RS Components.

“Research engineers don’t have to worry about getting the best price, or if they’re looking for particular high-spec requirements, we’ll know where to get them,” Georgina says. The company has two main streams of business, plain printed circuit boards (PCBs) – the green circuit boards that go into electronic devices and full prototype assembly.

Mint Tek has worked with the Tyndall Institute in Cork and Dairy Master in Kerry, which develops monitors for cattle. It also helps start-ups – which would have low volume requirements – to source prototypes. Two of these are NuWave Sensors, which makes wireless air quality sensors and Myoctopus, an open source smart home platform.

Other innovative Irish start-ups include AgriKids, founded by Alma Jordan to educate children about safety on farms; Nova Leah set up by Anita Finnegan, which specialises in cyber security solutions for medical devices and ChildDiary, an app that improves communication between creches and parents, co-founded by Vanessa Bileu and her husband, Joao Carlos de Sousa. One thing is certain, the start-up community is flourishing and has placed innovation at its core.

In the first part on marketing to women we...

At Matheson, one of the largest Irish law...