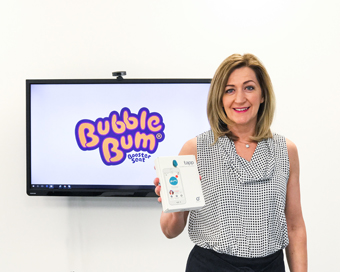 Travel solutions company Bubblebum has recently launched the first smartphone thermometer, the Oblumi tapp to the market which, when connected to a mobile phone converts into a digital infrared thermometer. The thermometer is now available in Ireland and the UK and will retail at €49.99.

The company, founded by entrepreneur Grainne Kelly, has signed a distribution deal with Oblumi, an award-winning Spanish company, to exclusively distribute the device in Ireland and the UK over a period of five years. The deal is worth c.€3 million to the company.

The Oblumi tapp is a small device that connects to your smartphone creating a digital thermometer, and has a range of capabilities that are accessed via its free downloadable app. The device will measure body temperature, send reminder alerts to take medication, notify you of correct dosages, and profile-share within an agreed group such as family members or carers.

Grainne Kelly, Managing Director of Bubblebum said, “This is the first device of its kind on the market to date. As a parent of a child who had frequent bouts of fever, I am acutely aware of the precautions people need to take with infants and the confusion that lies with tracking temperature and medication. Our objective is to alleviate these concerns and allow parents and carers to rely on the Oblumi device as a practical solution.”