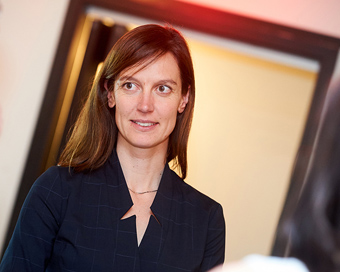 At just 35, Marieke Flament has lived in more countries, speaks more languages and worked in a greater variety of industries than most of us will in our lifetimes. She’s a fast thinker and an even faster talker, particularly about Circle, her latest project.

Circle could be a game-changer. A complex piece of technology aimed at simplifying the movement of money, it’s an app designed to let you share money with friends, for example if you’re out for dinner or buying concert tickets – it lets you ‘text’ the funds directly to a friend, with no fee. As the Managing Director of EMEA for the company, Flament describes her role as entrepreneurial; she set up the European operation almost as though it were her own start-up, and loves the nimble, flexible and above all growth-focused nature of what she’s doing. But how did she get to there?

Described on her Twitter bio as a citizen of the world, Flament spent her early years in France but moved around a lot, living in a number of European and Asian countries as a child. After training as a computer engineer, she started her career in Shanghai, working in IT for the global luxury goods giant LVMH. Realising that she “wasn’t very good” at coding, and she didn’t particularly enjoy it, a push from a mentor within the company moved her towards the finance function, based in Hong Kong. She loved it.

“I am driven by learning and I go where the opportunities are, so I learned about finance on the ground. I was lucky to be sponsored by a very senior person within LVMH who said ‘you are logical, you could work in finance’. I never knew what a P&L was, or a balance sheet, so I had to properly re-train; I went back to business school to do that.”

After completing her MBA in London – during which she and her husband co-founded their own start-up – she moved to Paris, where she joined a consulting firm. She remained there for less than two years, moving to the e-commerce space with Hotels.com, which then employed 250 people.

The pace at Hotels.com suited her. During her time there, the company was in full throttle expansion mode and it doubled in size. Before joining Circle, she had never worked in the financial industry, but each of her roles – apart from that first IT job – has had one thing in common; entrepreneurship.

“LVMH is of course a massive company, but at the time it was a small operation in Asia and I was involved in setting up offices there and overseeing fast growth. At Hotels.com there was the opportunity for growth, to make that happen, and Circle is my first real hands-on proper entrepreneurship. I like small nimble companies,” she explains.

Circle excites her because the company’s vision is “to make money work the way the internet does”. It’s a disruptor, and aims “to use technology in a way the big incumbents can’t. We are nimble, but on a global scale. If you have the right team, you can make it happen,” she adds.

Ensuring diversity in that team is important to her. Across Circle’s EMEA sites – London and Dublin – the team is evenly divided between men and women, but, she admits, it is harder to attract women. While she has no children as yet, it’s something she thinks a lot about.

“I’m a big supporter of women who are mothers on my team, I think about it a lot. Across the different countries I’ve worked in, childcare is completely underserved. I think it’s very important also to have a partner who is supportive, which I do. I really want to make everything possible and I hope we can do that.”

Within the tech industry, she says, there is a lot of awareness of the lack of women.

“There are quite a lot of things done like publication of data and different initiatives. I’m involved in HMT in the UK [an initiative for women in finance].”

She says fintech is particularly interesting in this regard, because both the tech and financial industries are low on women at a senior level, and it’s can be difficult to attract women. However, that problem isn’t unique to the sector – at LVMH the situation was similar.

“The luxury industry is very women-driven but not at a senior level, and it’s women who consume luxury products, so it’s very interesting.”

As for balance? Working in tech is more flexible than any of her previous roles, she says.

“In tech, once you have a wifi connection you can work from anywhere so working from home is not a problem, and if you want to work late there is always someone available in Boston, or elsewhere. I find it easier in this company to balance my personal life and work.”

Her guiding principle in business is to ask for assistance when you need it.

“One thing has guided me; having a mentor, not hesitating to ask for help and advice. It can be a woman or a man – some of the best mentors I’ve had have been men. Find someone you can ask for help, surround yourself with your cheerleaders and supporters and follow your passion.”

With a background in the private sector...