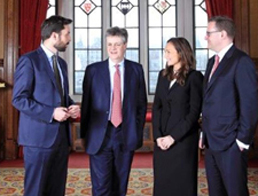 Recently, I was delighted to have the opportunity to meet and to interview Lord Jonathan Hill, former UK EU Commissioner for Financial Stability, Financial Services and the Capital Markets Union, and Irish Minister of State Eoghan Murphy at the House of Lords. This engagement forms part of Matheson’s commitment to assisting our clients to prepare for Brexit, and keeping them up to date with respect to European Brexit dialogue and political developments, and follows on from my last Brexit interview at the EU Commission Headquarters at the Berlaymont, Brussels with EU Commissioner Phil Hogan.

It was a significant day to be at the House of Lords, as the Lords were voting on the Brexit Bill. I am very obliged to Lord Hill that he gave so generously of his time to film our interview with him for our Matheson ‘Beyond Brexit’ video series, and to Minister Murphy.

One of the themes running through this interview is the UK-Ireland relationship post-Brexit. There was a consistent view expressed that London will continue to be a strong global financial centre. It is clear however, that UK and international companies currently using the UK as a gateway into the European Union will need to establish operations in the EU to ensure access to EU markets. We believe that Ireland is the natural location for many of these operations. It is important to be clear in this dialogue, however, that Ireland’s position and approach in this regard is about partnership rather than predatory engagement.

During our interview at the House of Lords, Minister Eoghan Murphy spoke about Ireland’s commitment as a member of the EU post-Brexit, and its continued future in the single market noting that Ireland will: “continue in the European Union and indeed be a leader in the European Union as we look to the future”.

Networking as a business tool has evolved...