Going for Growth? Most Definitely! 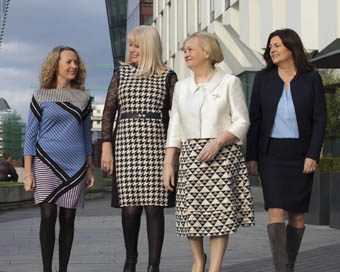 There is much talk about female entrepreneurs in Ireland lacking ambition, if the response to the recent call for applicants to Going for Growth is anything to go by we are looking at a major sea change in this situation. With support confirmed from Enterprise Ireland and KPMG, applicants were sought in January for a new cycle of Going for Growth (9th). To ensure that the quality and standard would remain high, it was agreed that invitations would issue to no more than 64 participants in total.

In seeking candidates the growth agenda was made very clear. Going for Growth is designed to support women entrepreneurs who have established businesses and are strongly focused on growth. It was emphasised that suitable candidates would be comfortable with growth goals and would like the advice and support of a highly successful entrepreneur and a group of likeminded women entrepreneurs to achieve those goals.

It was also made clear that applications would also be accepted on an exceptional basis from candidates who had more recently established businesses, if they could demonstrate that (i) their new venture, by its nature, takes more time in development than the norm, (ii) is highly innovative, (iii) has very significant growth aspirations and (iv) in the view of the Leads, the entrepreneur would gain from the type of support offered. The bar is very high for these candidates and there are only places for 16 of them at two round tables. If successful, they are referred to as Starting Strong and are grouped together on separate round tables, as their issues are different to those with well established businesses and positive cash flow.

Aware of the emphasis on growth almost 750 female entrepreneurs registered their interest. This is the highest level of interest in any cycle. Given the number and quality of the applications that were received it was decided to increase the number of voluntary Lead Entrepreneurs actively involved in the new cycle from eight to ten, so that more of the applicants could be offered places at the round tables. The following highly successful business women agreed to dedicate their time to supporting participants in the new cycle – Áine Denn, Caroline Keeling, Fidelma McGuirk, Maeve Dorman, Marian O’Gorman, Mary McKenna, Monica Flood, Nikki Evans, Oonagh O’Hagan and Susan Spence.

This would mean that a total of 80 applicants could be invited to join either a Going for Growth or a Starting Strong round table for the 9th cycle. This is the highest level of participants in any previous cycle and reflects the high quality and volume of applicants.

All 80 applicants, who were offered a place, accepted the invitation. All selected participants attended the National Launch Forum on 17th February 2017 and had their first round table sessions that afternoon.

The participants on the 9th cycle have more substantial businesses at the individual level and are more ambitious than in any previous cycle. Just over one third of all participants have some exports (39%) at present. The number of exporters is expected to more than double over the next five years.

Members of the Going for Growth Community can apply for a place on a Continuing the Momentum round table among a range of other developmental opportunities as part of their membership of the Community. These further development supports for the community are also supported by Enterprise Ireland and by KPMG.

Building on what has worked well in Going for Growth, Continuing the Momentum round tables are centred on voluntary Lead Entrepreneurs. These are primarily intrapreneurs and have experience of successfully growing business. For the 2017 cycle we were delighted that Breege O’Donoghue agreed to join those that had led Continuing the Momentum round tables previously – Clare Duignan, Deirdre Smith and Margot Slattery.

Continuing the Momentum round tables incorporate a slightly different model to that of Going for Growth, however, as they are focused on “Deep Dives” and on turning the participants into an advisory board for each other.

Twenty five Community members were selected for the 2017 cycle of Continuing the Momentum.

It is interesting to see their achievement of growth in recent years.

Are female entrepreneurs in Ireland ambitious? Are they Going for Growth? Most definitely!

Show Me the Money!

It’s the fire in the belly and the zeal to...