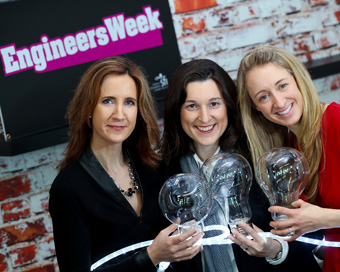 Engineers Ireland, Science Foundation Ireland and Microsoft Ireland have called on the Irish public to explore the dynamic world of Irish engineering as Engineers Week 2017 kicks off.

Now in its 11th year, Engineers Week is an annual campaign to inspire the next generation of engineers and excite students about the possibilities a career in engineering can offer.

Running from Saturday 4th to Friday, March 10th, engineers from all over Ireland will engage with their communities to showcase their profession to young people in their locality, highlighting the amazing ways Irish engineers are pushing the limits of ingenuity, creativity and innovation.

Speaking at Microsoft where the company’s software engineers helped mark the launch of the Week, Caroline Spillane, Director General of Engineers Ireland said: “Engineers Week is a chance for parents and young people to find out more about the many career opportunities available within the engineering sector and learn about the kind of skills that qualified engineers can build on as they move through their careers.

“There are often narrow views and misconceptions about the ‘type of person’ who should pursue engineering, so it’s fantastic to be able to see the diversity and ingenuity first-hand of the young engineers that work here in the Microsoft European Development Centre, who are problem-solving and innovating on a daily basis.” she continued.

Dr Ruth Freeman, Director of Strategy and Communications at Science Foundation Ireland, said: “Science Foundation Ireland is delighted to be supporting Engineers Ireland and Engineers Week 2017. These initiatives enable us to engage with young people and inspire them to consider further study and a career in STEM. Encouragement in the class room in these early years has the potential to spark a curiosity that could be the foundation of a lifelong interest or career.”

Joanne Morrissey, HR Director at Microsoft Ireland, said: “We are delighted to join with Engineers Ireland and Science Foundation Ireland in launching Engineers Week and calling on people across the country to get involved in the many activities it represents.”

With over 666 events and 57,684 participants already confirmed for the week, the event is coordinated on a national basis by Engineers Ireland’s STEPS programme – funded as a strategic partner of Science Foundation Ireland’s Smart Futures Programme.

To find out more about events taking place around the country or to register an event visit here.

Trinity College Dublin and the Trinity...

Vodafone Ireland has launched a week-long...