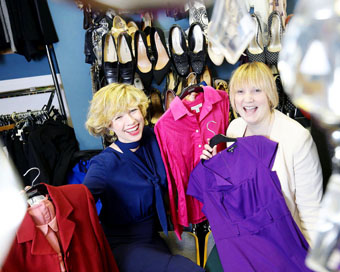 With one month to go to International Women’s Day (IWD) 2017, Dress for Success Dublin is calling on workplaces nationwide to hold a #WoMenAtWork gathering to support the charity’s work. Dress for Success Dublin supports women to enter the workforce and progress their careers, and was founded in 2010 by fashion stylist, designer and tech entrepreneur Sonya Lennon. The charity holds its biggest fundraising drive each year to coincide with IWD.

Announcing details of the 2017 IWD campaign, Sonya Lennon said: “We’ve chosen the theme #WoMenAtWork for our campaign this year, because we want women and men in workplaces nationwide to come together to mark International Women’s Day – and to use the day as an opportunity to discuss some of the issues facing women in the workplace.

“We want to see workplaces holding #WoMenAtWork gatherings around International Women’s Day on 8th March, and using these gatherings to discuss issues such as the gender pay gap, access to childcare, unconscious bias and discrimination. The gatherings can be as simple as a coffee morning, a lunchtime walk, a social outing or a team breakfast.

The services provided by Dress for Success Dublin include suiting appointments, a career centre, sectoral workshops and ongoing career support. The organisation is a registered charity and part of a worldwide network of Dress for Success partners.

Microsoft recently announced that it is to...