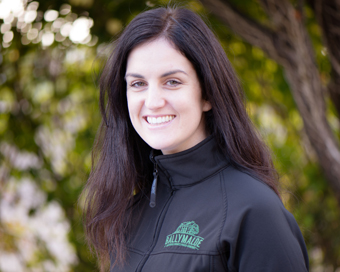 Maxine Hyde was just four years old when her mum began making the now famous Ballymaloe Original Relish in granny’s kitchen – but she still remembers the buzz of being around a start-up.

Now aged 31 and the Sales & Marketing Manager of Ballymaloe Foods, she recalls the excitement as her mum Yasmin carefully nurtured the fledgling business which started at the kitchen table of Maxine’s grandmother Myrtle Allen’s in Ballymaloe House.  Myrtle herself had developed the recipe decades previously as a way to use up the surplus tomatoes grown by her husband Ivan.  Production of the relish soon moved to a portacabin in the garden of Maxine’s family home in the Cork suburb of Glanmire, before eventually shifting a few miles further east to a manufacturing facility in the Little Island industrial estate on the outskirts of the city.  “Mum originally made it on her own mother’s kitchen, Myrtle Allen, in Ballymaloe House.    “We then bought a production unit in Little Island. Five years later we expanded into a bigger production unit which is now bursting at the seams, so we’re currently looking for a bigger facility.”

Ballymaloe Original Relish, which last year marked its 25th anniversary in business, is now to be sold in Woolworths stores across Australia – it’s already on sale throughout Europe and in the US and Asia.  Ballymaloe Foods had been working with Taste Ireland in Sydney for their online shop and in some select Irish pubs for several years but this is the company’s first substantial distribution deal throughout the sprawling continent of Australia.  “We are quite amazed and delighted that we are going to be supplying Woolworths all over Australia,” says Maxine.  Made with 100% natural ingredients from a family recipe dating back to the 1940s, the iconic jars will now be making regular journeys from their home in East Cork to the shelves of Woolies on the other side of the world, helping to bring something new to Aussies and a taste of home to Irish ex-pats.  However, as Maxine herself is quick to point out, the success of Ballymaloe Relish has been far from an overnight success:  “It has been a slow steady upwards trajectory for 26 years. We have grown gradually every year in a very controlled and steady way.  “If you’re manufacturing something yourself, it’s a slower trajectory than when you are getting someone else to make the product for you. However, the advantage is that you’re in complete control of quality.”

Initially, the fledgling company placed the relish on the shelves around the county in supermarkets and with wholesale food retailers – and nobody was interested:  “Nobody bought it at the beginning, but mum had faith in the product and that faith was realised – gradually it started to move off the shelves.”  So the first lesson for fledgling entrepreneurs taking the steps from local to national is to “Have faith in your product,” she exhorts.  Next up is to get the basics right from the beginning:  “When you’re at a local level, make sure your product is very strong. There’s no point trying to get your product into 200 stores when you’re not selling in 20. So get it right and get the packing sorted, down to the very tray it sits in.”  After that you can think about strategies for marketing it to potential customers.  “Your local strategy is very much about the basics,” explains Maxine.  “Then, if everything’s going well and you have a good supply of customers and no issues with the product, you’re ready to scale up.”

The scaling-up period must be handled very carefully, Maxine advises:  “For us this would have been a very important time to monitor the quality of the product because it’s at that stage you’re starting to really buy in bulk.  “You need to watch the quality. You have to watch all areas of your business when you’re growing.”  One area that needs attention during this period is staffing:  “You may have started off casually with one or two local staff and suddenly you’re hiring more people.  “You have to ensure you’re complying with employment law.  It’s about ensuring that all the ‘i’s are dotted and the ‘t’s’ are crossed because you’re now working on a bigger basis.”  When in doubt ask the advice of experienced business friends and use available facilities such as your Local Enterprise Office, and, in terms of food producers, Bord Bia.

As you become more well established nationally, and are perhaps thinking about expanding into the UK for example, the first job you must do is get to know your market. Maxine elaborates:  “If, for example, you’re supplying Sainsburys, visit their stores and see how it all works.  “Look at what its customers are buying and what the prices are.  “Then go to its competitors and learn about what other stores might or might not be stocking.  “When you then talk to your target store’s buyer, you fully understand what the store is doing and also what its competitors are doing.  “This helps you make a good argument to promote your product in their stores.  “In Australia, for example, they have relish and they really understand what it is, unlike America,” where, she explains, the concept of relish as a food product is quite different.. .“We knew that the Australian customer understands relish, and that knowledge informed the way we promoted it to the Australian market.  “Because we knew who our customers were and what they liked, our penetration campaign was better informed.”  Last but not least, she says, when your product is successful and lots of businesses start offering to stock it, be conscious of the risk inherent in stretching your resources too thinly:  “You cannot supply every country, so you have to limit who you do business with.  “We get queries from all over and world and you cannot deal with every country because you could stretch yourself too thinly – we may be a little guilty of that already so we’re very careful about taking on new customers in new countries!” .

It started out with six people working in an...