Nuritas™ and BASF Team Up 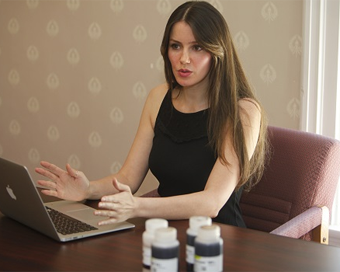 Dublin company Nuritas™, founded in 2014 by mathematician and computational biologist, Dr Nora Khaldi, is revolutionising the discovery of novel, natural and scientifically proven active ingredients that can manage and improve human health.

The company’s disruptive computational approach to discovery uses artificial intelligence, deep learning and DNA analysis to, for the first time ever, rapidly and efficiently predict and then provide access to the most health-benefitting components hidden within food, called peptides.

Nuritas™ has received global recognition for the impact its innovative technology will have on the future of food and health. Recently, we reported on plans for the company to triple its workforce as part of a major expansion of its Irish operations. In addition, the company also confirmed U2 band members Bono and The Edge as new investors.

In another positive move for the company, Nuritas™ and BASF Human Nutrition have announced a collaboration that will see the commercialisation and discovery of health-benefiting bioactive peptide networks within specific target areas of significant value. The peptide networks of focus in this collaboration are natural, food-derived, patented and of significant benefit to the health of consumers. These health benefits include, for example, anti-inflammatory activities.

The initial part of this substantial deal sees Nuritas™ grant an exclusive, royalty-based license to BASF to commercialise one of its existing peptides across a number of applications. The second component of the collaboration entails on-demand discovery of new peptides, based on health areas that are strategically important to BASF’s customers and, ultimately, the consumer.

To drive this on-demand discovery of new peptides, Nuritas™ will deploy its unique technology platform. This uses Artificial Intelligence and DNA analysis to predict, unlock, and validate highly efficacious peptides, exclusively from natural sources. BASF will use its scientific know-how and global reach for the scale-up, formulation and commercialisation of new bioactive peptide ingredients.

According to the CEO of Nuritas™ such a collaboration will accelerate this young, distruptive company’s vision of improving the lives of billions of people worldwide through the predicted discovery of bioactive peptides.

(CLS), based in Galway has today been...