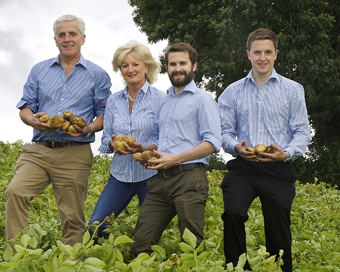 Twelve years ago, Tracy and Martin Hamilton were struggling vegetable farmers; today they run a multi-award winning food firm which boasts a turnover of €16 million, employs 180 people and exports all over the globe.

The metamorphosis, recalls Tracy, began over a few glasses of whiskey one night in 2003 as Martin pondered a situation that was becoming increasingly untenable: “The returns we were getting were very poor and they were deteriorating,” explains Tracy, however Martin had a sudden flash of inspiration:  “He came up with the idea that we’d make mashed potatoes as a convenience food.  “Martin had noticed peoples’ shopping habits. He saw that they wanted convenience. He thought, this is what we’d do – we’d add value to our vegetables to make convenience foods. He decided to steam-cook them to preserve all the nutrients and vitamins.”  However, she recalls, when the couple investigated the cost of the kind of steam cooker they would need for their new project, it was phenomenal.  “However, we have a very good friend who is also an entrepreneurial engineer. He and Martin designed and made the first cooker!”

The couple started their food business in 2004 with mashed potato and carrot-and-parsnip mash, selling the products at St George’s Market in Belfast, which, explains Tracy, is “a really good award-winning local market.”  They also began selling to a number of independent stores and butchers shops, before moving on to supply retail groups such as Spar and Dunne’s Stores:  “We are available in most of the main supermarket chains in Ireland now,” Tracy observes, adding that in the early days the couple mostly invested their own money in the enterprise, although they received some marketing support from Invest NI:  “We very much did our own thing in the early stages, because growth was so fast and so rapid we had to invest very quickly. Basically we did it ourselves for a long time,” she says, adding that making it to the finals of the prestigious InterTradeIreland Seedcorn Competition in 2005 for the Northern Ireland region, gave the company a big boost:  “It’s a fantastic award. InterTradeIreland has a very inspiring awards structure and they are very good at helping companies gain recognition. Their Seedcorn Awards are very prestigious so we were thrilled to be finalists”. The company also participated in InterTradeIreland’s Acumen programme, which offered funding to allow the company to build and generate cross-border sales. The support offered contributed towards employing a full-time sales and merchandising representative in the Republic of Ireland.  This opportunity, says Tracy, added significant expertise to the sales management structure in the Irish retail marketplace, resulting in increased sales and new listings. “The support was invaluable to the development of cross border sales and growth of the company,” says Tracy who in 2013 won the Woman and Agriculture Award for Agri-Business Innovation, an awards scheme run by The Farmer’s Journal – the same year Martin was finalist in the Ernst and  Young Entrepreneur of the Year awards.

Twelve years on from that glass of whiskey, the Hamiltons, have notched up some 120 awards, including an eye-watering 18 Great Taste Awards. They have scaled up from farming 230 acres around Strangford Lough in Co Down, to around 1500 acres. They produce a whole range of quality convenient vegetable and potato dishes ranging from the traditional accompaniments of mashed potato and champ, to complete ready-meals. Their farm and food production business now boast sixth-generation involvement – one of the couple’s two sons, Lance, who holds a degree in agri-food business is its Sales Director while the other, Jack, is its Marketing and Exports Director – he holds a Master’s degree in Diplomacy and International Relations.  Tracy and Martin still grow many of the vegetables in their 40-plus food products range – these are still steam-cooked on the farm in a state-of-the-art industrial kitchen, and the firm exports everything from crispy vegetable bakes to Mash Direct’s award-winning chilli baby-bakes. These are shipped to destinations across the world, including the UK, the East Coast of America and as far away as Dubai and Abu Dhabi.  “We’re the top-selling brand in chilled side dishes in the UK and Ireland,” says Tracy. The company is growing by some 34% a year in the UK and 18% in Ireland and is listed in more than 4,000 stores throughout Ireland and the UK.  “We don’t use any artificial flavourings, colourings or preservatives and everything is about the taste and texture of home-made food – it’s real food. Everything we produce is gluten free,” says Tracy who says Mash Direct is extremely picky about the kind of vegetables it grows. “We are fussy about the seed varieties we use – our vegetables are heritage varieties,” she explains. “We are selling one pack of product every two seconds. We supply supermarkets, hotels, hospitals, pub chains, care homes, restaurants and food manufacturers.”

The future looks very bright for this dynamic company, which was recently awarded the title of Best Food Company in the UK, ahead of some of the top food firms in Ireland and the UK, at the Food Manufacture Excellence Awards in London.  Never one to allow grass to grow under its feet, Mash Direct is currently planning an expansion of its exports to Hong Kong, Singapore and mainland Europe and is in negotiations to that end.  Shortly after completing her interview with WMB, Tracy received the news that Mash Direct had won the Gold Award for Innovation at Sial in Abu Dhabi – the overall award in Sial Middle East.  As Tracy said herself: “Phenomenal!”