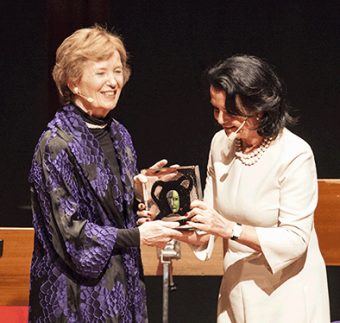 Mary Robinson, President of the Mary Robinson Foundation – Climate Justice and a former United Nations High Commissioner for Human Rights, was presented with the 2016 Stockholm Human Rights Award during a ceremony held at Sweden’s Berwaldhallen concert hall last week. The presentation was made by Anne Ramberg, Secretary General of the Swedish Bar Association, before an audience of more than 1,000 people, including the President of the International Bar Association (IBA) David W Rivkin, Sweden’s Prime Minister’s State Secretary Hans Dahlgren, Swedish cabinet ministers and representatives from the diplomatic corps, the judiciary, the legal profession, academia and human rights organisations.

Conferred annually, the Stockholm Human Rights Award is given by the Swedish Bar Association, the IBA and the International Legal Assistance Consortium to a person, or an organisation, in recognition of outstanding service in the support and furtherance of human rights and the rule of law. During her acceptance speech Ms Robinson said she was very honoured and humbled to be the Stockholm Human Rights Award recipient, and that the she did not receive the award personally, but on behalf of all those who struggle for human rights.

A frank and wide-ranging interview with IBA Executive Director Mark Ellis followed her acceptance speech. During the interview Ms Robinson observed and warned: ‘There is a bit of fear, which has been whipped up by populism – the populist Trump, the populist Brexit… We need to get back to a reality based on facts and evidence… The EU must remember its real values, which were not argued in Brexit… We are in a bleak time of populism but we will get back to our values, and we must do it quickly.’ Ms Robinson, the eighth Stockholm Human Rights Award laureate and a staunch advocate for global justice for the poor, the disempowered and the marginalised across the world, was given an extended standing ovation. http://www.ibanet.org/