Disruptive Technology and the Women Behind It 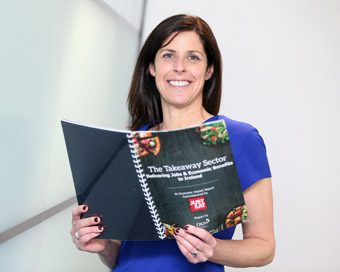 Throughout history there have been plenty of examples of ‘disruptive’ technology; electricity put paid to the paraffin lamp industry and the automobile to the coach-and-four supplier.

These days the pace of technological change is so rapid that new ‘disruptive’ technologies – some useful, some not so much – are popping up all over the place. Netflix and other online streaming services have destroyed the DVD rental market, and while you watch, you could be eating a takeaway you ordered on JUSTEAT.ie while sitting on a piece of furniture you got on a freecycling website.

According to Amanda Roche- Kelly (pictured), the MD of JUSTEAT.ie, which launched here in 2008, revolutionising the takeaway industry, of the company’s 12 operating countries, Ireland’s been the most successful in adopting mobile technology.

JUST EAT has 1,800 partner restaurants around Ireland and its biggest competitor is still the telephone. The customer profile is age-sensitive, with older customers still more likely to phone for their takeaway and even to collect it, JUST EAT is winning among 18-35s and moving into the 40s now as time-pressured couples with young children use the service.

JUST EAT has a team of territory managers who deal with restaurants out on the road and its primary markets outside Dublin are, predictably, urban areas with good broadband coverage. Surprisingly, over 40% of JUST EAT’s business is prompted by something as analog as the branded sticker in a restaurant’s window, according to its market research.

“We invest massively in marketing,” explains Roche-Kelly, “we spend lots to drive money to restaurants but you’d be surprised at how many don’t want the sticker because they are protective of their brand”.

The JUST EAT brand has expanded in recent years to include more premium restaurant brands and has also added its own delivery service in Dublin, in order to help snare some restaurants that previously hadn’t delivered. JUST EAT supplies the drivers and advises on packaging and wait times to ensure a standard is maintained.

“The main thing is customers having the best takeaway experience possible, and we’ll end the agreement if it’s not working,” adds Roche-Kelly.

It started out with six people working in an...