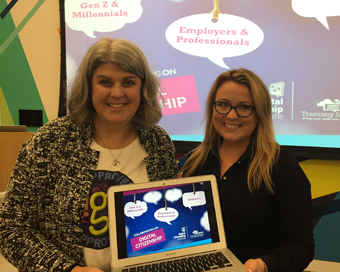 CEO of Digital Training Institute Joanne Sweeney-Burke who is based at the Innovation Centre at NUI Galway has been writing and delivering digital citizenship programmes for the past four years in conjunction with her 21-year old daughter Sophie, a final year NUI Galway accountancy student.

Four years ago Joanne and Sophie wrote a course for teens called Young Minds Online which was piloted in Salerno Secondary School in Galway. It was later sold to Kaspersky Lab, one of the world’s largest Internet security companies.

Last week their work on digital citizenship brought them to Twitter headquarters in San Francisco where they addressed a global audience of influencers.

Speaking from San Francisco, Joanne said, “I wrote a blog post after the Digital Citizenship Summit explaining why parenting at 17 years old inspired me to be a digcit parent. My age coupled with my digital skills gave me the confidence and know-how to help Sophie navigate the social web as a 13-year old teen. It planted a seed of how both of us could empower others in digital citizenship.”

Co-founded by Dr Marialice Curran and David Polgar, the Digital Citizenship Summits have taken place across the US and earlier this year took place in Bournemouth in the UK. Joanne and Sophie spoke at this event also.

Enterprise Ireland has launched its latest...