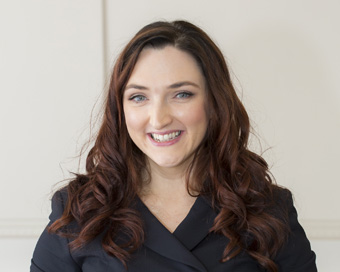 She was still in school when she coolly negotiated the deal that gave her 25% of what was to become a thriving business with a turnover of more than €2 million.  In fact, Alison Ritchie was only 15 when she showed the first signs of the dynamic entrepreneur she would become.

These days Ritchie is still the Queen of Cool – she’s Managing Director of Polar Ice Limited, a thriving company which makes the dry ice so familiar to fans of Riverdance or Game of Thrones – but which is also a sought-after coolant used in the transport and storage of pharmaceutical products and perishable food.

The Portarlington company, which has branches in Dublin, Cork and Northern Ireland, now employs 17 people and in the past three years showed a 78% increase in business. Twenty years ago, however, Alison Ritchie was just a Transition Year schoolgirl, the eldest of three children in a family which lived in Cork, where her father, Colm Powell worked as a prison officer at Spike Island.

It’s clear that she inherited at least some of her business acumen from Colm, whose strong entrepreneurial streak emerged when he spotted the potential of a small box of dry ice on a factory floor.  In 1995 a teenage Ritchie was holidaying with her grandparents in Portarlington. One day she visited a friend who had landed a part-time job in a local company that made ice cubes.

When her father arrived to collect Alison and bring her home to Cork, she convinced him to visit the little ice-cube factory.  “It was really impressive,” she recalls – but her father’s attention was snagged by an unassuming little chest of dry ice in a corner.  “My friend showed us a piece of dry ice and we took it to the canteen and put some hot water on it.  It started to create this beautiful fog that flowed and fell, just like real fog, it was a spectacular sight. My Dad was fascinated.”

At the time, Alison recalls, her father was thinking ahead to retirement – as a prison officer, he was eligible to take retirement from age 50.  “He was very focused about having something lined up for retirement,” she recalls adding that Colm was intrigued by the potential of dry ice and carried out a significant amount of research on the product, which he discovered was not being manufactured in Ireland, despite being  much in demand abroad.

“Back then dry ice was being imported into Ireland for a small number of pharmaceutical firms which were using it to keep products stable and for sending products abroad.” Convinced by its potential, her father and two of her uncles formed a partnership to buy the Portarlington ice-cube company for £45,000.  The company began trading in April 1996  and Alison worked there on weekends and holidays.

Impressed by her determination and business acumen, her father and uncles told her that if she continued to work part-time in the business through school and went on to study business at third level, she would get 25% of the business on graduation.  She got that business degree in 2002 and moved to Portarlington to work full-time in the company where she was soon joined by her brother Robert.

“At that stage we were still just producing ice cubes but we were also selling the dry ice – we were very focused on selling it,” she recalls, adding that once they had decided they had enough market demand to justify it, they set about raising the money for a £2 million new manufacturing plant for dry ice.  Alison, her father and her uncles invested their savings, re-mortgaged what they could and set up a Business Expansion Scheme – but their combined efforts brought them to just €1.5 million.

“It was very tough,” she recalls, explaining that they desperately needed that final £500,000 to pay for a critical piece of equipment. However, by late 2003/early 2004 the quartet had exhausted all available financing avenues without success.  “It was a very scary time,” Ritchie recalls now.  One day, however, a friend of a friend of a friend who happened to be an investor, heard of their plight and was intrigued by the company’s possibilities.

“He met my father and myself in Polar Ice. We told him our story and showed him what we had and explained the vision for the company.”  When the man said: “I am not investing in this business,” Alison’s heart dropped. But then he continued:  “But I am investing in you.” Then he wrote them a cheque. Alison was just 22 years old.  This was January 2004 and soon afterwards, Polar Ice was up and running as the only dedicated manufacturer of dry ice in Ireland.

“Essentially, the dry ice was used for airline catering to keep food chilled or frozen, to store medicines and drugs,” she recalls, adding that her old alma mater, Dublin City University became a steady customer, using it for its laboratories. The company also sells to Riverdance and Game of Thrones, though the entertainment sector accounts for only a small portion of its business. Four years later the firm set up a separate non-abrasive cleaning business, which used dry ice to clean high-end machinery and equipment. This company, Polar Ice Tech, which became highly profitable, was sold on earlier this year.

In 2008, Alison, then the mother of twin baby girls, Emma and Kate, started a part-time accountancy course, and in 2011 graduated as a qualified Certified Public Accountant.  Next she helped drive a €500,000 investment programme to upgrade and extend the manufacturing facility, which resulted in a big expansion, attracted more customers and opened up new markets – between 2013 and 2016 Polar Ice experienced phenomenal growth in business of 78%.

But Alison, whose third, and youngest daughter Sarah was born in 2013, still hasn’t allowed any grass to grow on her tracks.  This year – the 20th anniversary of the establishment of Polar Ice – she and her brother, who is now the company’s Production Manager, are in the process of buying out her father and uncles, something which was always part of the family’s long-term plan.  “I think everything that has gone through in the last twenty years has turned us into a lean company well positioned to take advantage of growing. ”

Winning the WMB Female Entrepreneur Award 2016 helped put everything in perspective, she says, because it allowed her take to stock of just how far she and Polar Ice have come together: “It makes you stop and take a picture of where you are and how far you have come. To get public recognition for that is quite humbling. I was not expecting it!”

Take a baker from Massachusetts who grew up...