I WISH Initiative Goes Nationwide in 2017 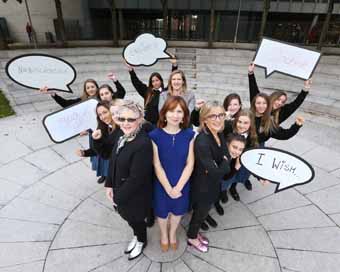 I WISH, a hugely successful partnership initiative encouraging young women to pursue a career in STEM (science, technology, engineering and maths), will spread nationwide in 2017 with events in Cork on 9 and 10 February 2017 and in Dublin on 13 and 14 February 2017.

I WISH is an initiative that combines the power of industry, academia and the public sector in order to inspire and encourage young women to pursue careers in STEM. It was set up in 2014 by three Cork businesswomen, Gillian Keating, Partner at Ronan Daly Jermyn, Ruth Buckley, Head of ICT and Business Services at Cork City Council and Caroline O’Driscoll, Partner at KPMG, the Boots WMB Empowering Women Award 2015 winner and panellist at this year’s WMB Conference & Awards.

This year the award-winning I WISH conference and exhibition is expanding nationally to engage with more than 4,000 secondary school girls with the purpose of encouraging and motivating them to pursue careers in STEM. As part of their commitment to promoting STEM to young girls, the I WISH team conducted research on over 2,000 female TY students and their perceptions and attitudes towards STEM subject choices and careers. The survey, conducted by UCC, has informed a report presented to the Minister for Education and Skills Richard Bruton T.D. at the launch today.

Speaking at the launch, I Wish co-founder Gillian Keating said, “Earlier this year we surveyed 2,000 girls and 75% of them said that having a career that involved helping other people was important to them. What is interesting however is that these girls are not relating Physics and Chemistry in school to careers where they can do just that – only 16% of the girls intend to do physics.”

“The world is facing incredible challenges in the next decade – over population, food shortages, urbanisation, ageing populations, climate change. We know that the answer to all of these problems lies in STEM. I Wish 2017 will explain to these girls how big the world’s problems are, we will put female role models centre stage to show them the real jobs in STEM that can help solve these problems and ultimately help people in a truly remarkable way.”

“We are thrilled to be back on board supporting I Wish again this year. As anchor sponsor in 2016, our team member volunteers saw first-hand the positive impact the event had on attendees. The students left the event hugely energised, with many thinking about their own future careers in a different light. It’s fantastic that Dublin is getting its own event this year, which will further broaden the reach of I Wish. We look forward to meeting students from across the country in February and telling them all about the world of options that the STEM subjects make possible, as well as emphasising the broad range of talents which have a home in the technology sector,” said Niamh Townsend, General Manager, Dell EMC Ireland and the WMB Businesswoman Award 2015 winner.

The I WISH conference and exhibition will include talks, demonstrations and interactive hubs where students can meet and engage with inspiring women working in a variety of STEM roles. Students will also hear from female leaders from organisations such as Dell, Arup, PepsiCo, Google and Twitter to name a few. There will also be young female entrepreneurs from a variety of STEM backgrounds talking about their careers, as well as young women with careers in traditionally male-dominated areas such as engineering and maths.

(Pictured L-R:  I Wish founders Caroline O’Driscoll, Ruth Buckley and Gillian Keating with students from St Finians C.C Swords at the launch of the IWish-the STEM event for girls.)

I WISH  takes place in Cork City Hall on Thursday 9 and Friday 10 February and in the RDS Dublin on Monday 13 and Tuesday 14 February 2017. The events are free to attend and promise to benefit young women with hands-on practical information, talks and demonstrations by women in STEM roles. A full line-up of exciting national and international speakers will be announced in the coming weeks. Register at www.iwish.ie

InterTradeIreland has announced that it...

One of Ireland’s field management...