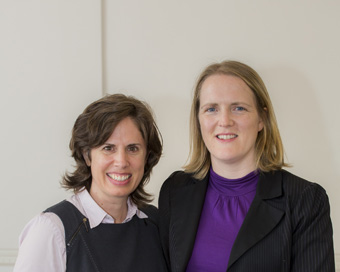 Take a baker from Massachusetts who grew up in a home where the cookie jar was always full, add a West Cork farmer’s daughter with a head for business and you’ve a match made in heaven.

Quite literally – because not only are this dynamic entrepreneurial duo currently planning the establishment of their second cookie store in only two years; they’ve also just tied the knot!

Raised on a dairy and beef farm in Kilmichael, County Cork, Elaine Cohalan grew up surrounded by green fields and lots of siblings, in a rural family where locally-sourced, home-made food was the daily fare.  American Jenny Synnott was reared near the city of Boston, in a home where home baking was not just the norm, but mouth-wateringly good, especially the cookies.

Elaine was playing rugby with the Old Belvedere Women’s Rugby Team and studying for her Master’s Degree in Business when she met Jenny one rainy night in 2008, shortly after Jenny, a fellow rugby fan, had moved to Ireland.  Jenny had fallen deeply in love with Ireland, though she did take issue with this nation’s lack of real, American-style cookies, a deficit which she set about resolving by baking her own.

The two became good friends, a relationship which in time became something more. In the meantime Jenny’s delicious chewy cookies, which she always brought along on team bus trips, were gaining a strong reputation amongst club members.  “Any time we had a team bus journey, Jenny would bring some of her cookies – the chocolate-chip and chocolate-chip-and-pecan-nut cookies were particularly popular,” quips Elaine.

“They were very different to Irish biscuits; chewy and soft in the middle, whereas Irish cookies would be more like biscuits with chocolate chip in them.”  At the same time Jenny was pondering the logistics of starting her own business – possibly, recalls Elaine now, a wine bar. Over the years, as the two became best friends and in time, a couple, they increasingly wanted to work together:  “Both of us were working in jobs that we were not feeling too fulfilled about,” Elaine recalls.  “We felt we could do something ourselves and we wanted to work together.”

Never a pair to let grass grow under their feet – as subsequent events were to demonstrate – Jenny embarked on a post-graduate course on Innovation and Entrepreneurship at UCD.  The duo set up the Dublin Cookie Company in March 2014, initially trading at markets and events around Dublin, all the while living on their savings.  “We started with one market a week, it was very small, just trying things out and brand testing our product and pricing, while living on our savings,” Elaine recalls now.

By that summer they had widened their net to four weekly markets and had moved the baking operation out of their own home and into the Spade Enterprise Centre in Smithfield: “It had industrial-sized ovens so we went from being able to bake 20 cookies at a time to 100,” says Elaine.  With greater baking capacity, the two took on more markets and events, including the St Stephen’s Green Christmas Market which was a significant challenge for the fledgling business:  “This was a 40-day market. It was like having a shop-front in the middle of Dublin and right in the middle of the Christmas shopping rush, so we were really tested!”

But they passed the test with flying colours, and when the big market finished for the season the girls shut up their stall, secure in the knowledge that they could now cater for any event.  Big events followed – Taste of Dublin, Bloom, Electric Picnic, and a deal to supply cookies to Supervalu. By March 2016 they were ready to open their first retail outlet.

They chose the heart of old Dublin, the Liberties, for the country’s first ever dedicated cookie shop with a big communal table “because we love the idea of good food bringing people together.”  The menu is mouth-watering – every kind of possible combination from Belgian Chocolate-Chocolate-Chip and Rainbow Sugar cookies to Sea-Salt-Caramel-and Toasted-Pecan as well as ‘cookie sandwiches’ – banoffee, carrot cake and even a pumpkin-spice and-earl-grey variety. You can wash it all down with coffee, tea or a variety of flavoured milks which come in little glass bottles, while those with a mind to bake their own can invest in a variety of bake-your-own-cookie dough.

Although in the throes of finding a location for their second city-centre outlet – and organising a pop-up cookie shop just off O’Connell street – the duo somehow found the time to get married. The wedding took place on October 8th last and featured, needless to say a Cookie Bar, but no honeymoon – Elaine and Jenny are far too busy. They are, however, planning a very special Christmas honeymoon!  And as if life wasn’t sweet enough, the pair also recently strolled away with the Sodexo WMB Female Newcomer Award 2016!

Elaine declared: “The award means an awful lot to us – to be recognised as entrepreneurs gives us credibility with investors and other business owners as well as the confidence to proceed to the next stages –  and it’s also great PR!”