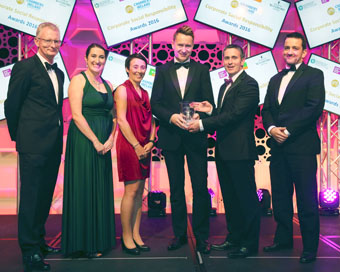 PayPal won an Excellence in the Workplace award at the 2016 Chambers Ireland Corporate Social Responsibility Awards held in Dublin last week. This prestigious national award was given to PayPal in recognition of its highly successful diversity and inclusion programme in Ireland.

Now in its 13th year, the annual awards ceremony recognises and celebrates the important contribution that CSR practices make to the local economy and society.

PayPal was a winner for the second year in a row in the Excellence in the Workplace category. This year, PayPal gained the highest recognition for its diversity and inclusion strategy, which is delivered across five key areas. These are inclusion training, women in business support, LGBT initiatives, a commitment to hire from the live register, and inclusivity in a multicultural workforce.

The award recognises that PayPal puts its values into action, enabling an inclusive workplace environment of involvement, respect and connection. PayPal embraces diverse backgrounds, perspectives and ideas to create a better working environment and make a real business impact.

PayPal employs 2,600 people at its European Operations Centres in Ballycoolin and Dundalk. Its talented workforce is integral to PayPal’s international business, which serves 188 million active accounts across the world. PayPal also plays a major role in the local community by supporting many businesses and charities in both areas.

Speaking about the award win, Maeve Dorman, Head of Global Operations EMEA, said: “We’re thrilled that the dedication and hard work of our teammates has been recognised at the highest level in Ireland through this award win. Inclusion and equality are the foundations of everything we do at PayPal. We are fully committed to advancing, cultivating and preserving a culture of inclusion and diversity because it is the right thing to do for employees, our company and the communities we serve. This strategy also makes PayPal a better and more fulfilling place to work and build a career.”

Microsoft employees are setting off on a...

WMB is all about highlighting and encourage...