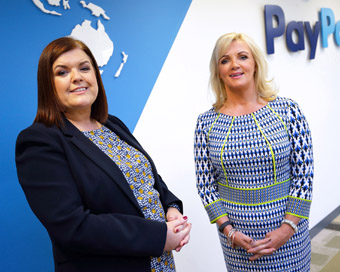 In her new role, Louise will take responsibility for growing revenue and customers for PayPal in more than 100 countries, including Ireland, across Europe, the Middle East and Africa.

Louise joined PayPal from the senior management team of GE Money in 2006, when PayPal had 200 employees in Ireland. She has overseen significant growth and expansion with employee numbers currently at more than 2,600 in Dublin and Dundalk, and is on track to grow to 3,000 by 2018.

She has held a number of senior leadership roles in her time at PayPal before becoming VP of Global Operations in EMEA in 2012. Following the promotion to her new role, Louise will report to Rupert Keeley, CEO, PayPal EMEA.

Maeve Dorman also joined PayPal in 2006. In her most recent role, Maeve has served as PayPal’s Senior Director of Telesales and Merchant Operations, EMEA and Australia from 2013. In her new role, Maeve will take responsibility for PayPal’s growing Operations Centres in Dublin, Dundalk and Berlin. She will join the senior global leadership team for Operations and report to John McCabe, PayPal’s SVP of Global Operations.

Louise and Maeve will continue to be based in Ireland. Both executives share a passion for corporate social responsibility, with a particular focus on promoting diversity and inclusion initiatives in the workplace. This was recently recognised at the 2016 CSR Ireland awards when PayPal won the Excellence in the Workplace award for its successful diversity and inclusion programme.

Louise Phelan, VP, Western, Central and Eastern Europe, Ireland, Middle East and Africa, PayPal, said, “I’ve enjoyed my ten years in PayPal’s Global Operations team immensely and I’m proud to have lead EMEA Operations through such exceptional growth. I’m very excited to be given the opportunity to lead this extensive new business unit and to drive growth across the entire region.”

“I’m also delighted that Maeve Dorman will assume responsibility for our Operations Centres in Dublin and Dundalk. Maeve has extensive leadership experience and her passion for PayPal’s customers and teammates is evident in everything she does. I look forward to working closely with Maeve and her teams as we continue to advance the business together in Europe, the Middle East and Africa.”

CPM is delighted to announce its 30th year...