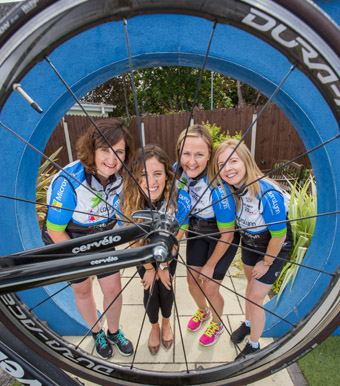 Microsoft employees are setting off on a 650-kilometre cycling challenge from Mizen Head, Co Cork to Malin Head, Co Donegal in support of charity LauraLynn, Ireland’s only Children’s Hospice.

This is the third year for Microsoft employees to undertake the challenge and they’ve set themselves a target of raising €40K which will bring the total amount fundraised by the cycling team in the last three years to €100K.

Microsoft has a long history of supporting LauraLynn. The organisation is located in Leopardstown near to where Microsoft operates and as a neighbour Microsoft does as much as it can to support them. Microsoft has provided LauraLynn with software donations and technology training and employees have collectively become passionate about supporting the cause, with volunteering hours and support at their annual Christmas ‘Light Up LauraLynn’ day.

The cycle will run over four days, beginning tomorrow 7th of September and ending on the 10th of September. The team will cycle for approximately eight hours per day, travelling an average distance of 160km. 40 Microsoft employees have volunteered to take part in the cycle, with 29 cycling and 11 acting as crew.

Sharon Morrow, CEO, LauraLynn Ireland’s Children’s Hospice, said: “We are so thrilled that Microsoft employees have chosen LauraLynn as their charity for the Mizen to Malin cycle for a third year.  The Microsoft team really goes the extra mile in raising both funds and awareness of our vital children’s hospice services. Over 3,800 children in Ireland live with life-limiting conditions.   All the funds raised from the cycle will go directly to providing hospice care to these children and their families.”

“We’d like to say a big thank you to all the Microsoft cyclists and wish them well on their journey” she concluded.

LauraLynn’s founder, Jane McKenna, was the winner of Newstalk WMB Social Entrepreneur Award 2013. To find out more about the LauraLynn Children’s Hospice log on to www.lauralynn.ie.

PayPal won an Excellence in the Workplace...