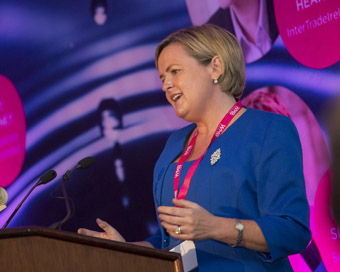 The ISE recruited 20% more staff in 2015 to facilitate the growth and the provision of new services. More than 70% of the ISE’s revenues come from international business lines.

An analysis of revenues shows the ISE’s primary markets business, which includes international debt, fund and equity listings, had an exceptional year recording an increase in revenues of 12% to €19 million (2014: €17 million). With 34,304 securities listed on the ISE’s markets at the end of 2015, the ISE was also confirmed by the World Federation of Exchanges to be the leading exchange worldwide for listing bonds and investment funds at year end.

Among the 7,219 new debt listings during 2015 were Trinity Biotech, Kraft Heinz, Alitalia and Hipercor. New investment funds amounted to 1,405 and figures show over 4,000 issuers from 80 countries around the world including Europe, North America, Latin America, the Middle East and Africa are now present on ISE markets.

Traded markets business which represents income from equity and Government bond transactions, market data sales, code issuance and trading membership fees saw income rise by 11% to €8.6 million (2014: €7.7 million). The financial results reflect the 5.6 million record level of trades recorded on the ISE’s markets during 2015, an all-time high. With equity trading activity rising by 26% the ISE retained its position as the #1 centre of liquidity for trading Irish shares.

Other income in 2015 remained at a similar level to 2014 at €0.2 million. Operating costs which mainly consisted of staff and infrastructure costs were controlled tightly during the year and rose by 6% to €20.2 million (2014: €19 million).

*   ISE wins #1 workplace in Ireland at the Great Place to Work awards.

*   ISE extends strategic partnership with Deutsche Börse to use their trading technology to 2021.

ISE Chief Executive Deirdre Somers said: “Our 25% growth in profits and increase in revenues reflect an exceptional year for the ISE’s businesses with listing and trading activity on our markets reaching record levels. The exchange environment continues to be very competitive so to achieve the #1 ranking for debt and fund listings worldwide and to maintain our position as the leading venue for trading in Irish shares is extremely positive.

We remain confident of our ability to expand our Irish and international businesses in the coming years and have increased our staff numbers and are investing in our corporate headquarters to facilitate this. While the recent decision by the UK to leave the EU presents some risks to our business it also presents some opportunities and we are confident about our future outlook.”

Ms Somers added that while global markets remain volatile it was important for the ISE to diversify its service offering and to enable the next generation of entrepreneurs looking to achieve scale through capital markets.

“2015 saw us expand our service offering in a number of areas. Our inaugural #IPOready programme has been very successful in building skills and knowledge among high-potential companies and we are hopeful that some participants will become candidates for a stock market listing in the future.”

Microsoft employees are setting off on a...