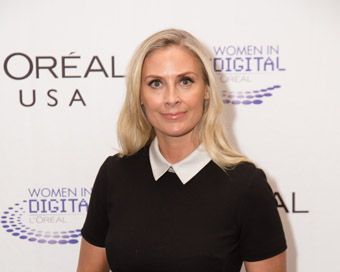 Barron was one of three finalists invited to present at L’Oreal’s Inspiration Day on September 16th in front of more than 500 L’Oreal Senior Marketing Executives. Judges included Arianna Huffington, Founder of The Huffington Post and Frédéric Rozé, L’Oreal USA CEO. Other finalists were Morgan DeBaun, founder of Blavity; and Grace Woo, founder of Pixels.IO.

Barron, who previously won the WEB Summit Spark of Genius Award and the PwC Most Innovative Startup award, is ready to collaborate with the L’Oreal brand on a global scale. “This is a great opportunity for Viddyad. We are honored to be welcomed into the L’Oreal family and look forward to a close partnership with them,” said Barron.

Barron’s winning company, Viddyad, is a real time video creation and advertising platform that allows businesses to create, edit, publish and distribute their own video advertisements & branded content in minutes. Viddyad users have access to millions of video clips and images through Viddyad’s partnership with Getty Images. “Our underlying technology enables brands to centrally create, control and customise branded HD video content quickly and easily and dynamically push it out online to social media, digital signage and mobile in minutes,” said Barron. “Video is the future of advertising, and brands need more access and control over automated video content creation in a twitter and facebook world so they’re not always depend on high agency fees to make dynamic changes and innovate faster.”

According to eMarketer, digital ad spend will surpass that of TV advertisements in 2017 for the first time ever. Next year, digital ad spend will be $77.37 billion, or 38.4% of total advertising spending. “We’re excited to open up the world of digital advertising to more and more businesses in the coming year. L’Oreal is our next step in reaching more global brands with our technology.”

Minister of Jobs, Enterprise and Innovation,...