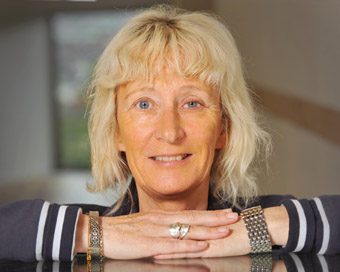 Athena SWAN aims to improve the representation of women in higher education, particularly in science, technology, engineering, medicine and mathematics (“STEMM”). The award to UCC recognises that the University has a solid foundation in place to remove barriers to women’s progress in STEMM disciplines.

Led by Professor Caroline Fennell (pictured), Senior Vice President Academic and Registrar, a diverse team of UCC staff developed a three-year action plan, which is now being implemented across the university.

“We are very pleased to have earned this award. Gender inequality in senior leadership in higher education is a challenge we face not only in UCC, but across the third-level sector, in Ireland and beyond,” said Professor Fennell.

“This award recognises work underway in UCC to build the right infrastructure and supports so all members of our academic community, and indeed all our staff, can contribute to their full potential.”

Congratulating Professor Fennell and the Steering Group, UCC President Dr Michael Murphy said: “As a University, we strive for excellence in research and teaching by promoting values of openness and diversity. Through Athena SWAN, we can translate these values into concrete actions that will help us attract and nurture the most talented staff.

“Our senior management is committed to pursuing the Athena SWAN agenda and delivering the commitments set out in our action plan. This is a long-term commitment with some challenges ahead; however, today’s announcement recognises that we have made a significant step forward. I commend Professor Fennell and our Athena SWAN Steering Group for their hard work and success.”

The Athena SWAN Charter was established in the United Kingdom in 2005, and is run by the London-based Equality Challenge Unit. With the support of the HEA, it was extended to Ireland in 2015. All seven Irish universities, 14 institutes of technology and the Royal College of Surgeons have committed to the Charter principles.

The award, which will be valid until August 2019, will be presented at an event to be held in Dublin on September 20th.

Trinity College Dublin and the University of Limerick were the first Irish institutions to receive the prestigious Athena SWAN award.

Skills Needs of the Biopharma...