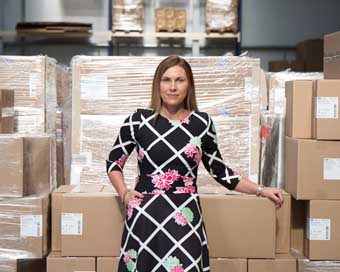 With a background in admin in a variety of roles, her years in medical distribution meant that when founder Owen Curtin was looking for a righthand woman in 2003, he thought of Tara immediately.

She was just about to turn 30 when she was appointed Healthcare 21’s commercial manager and says frankly that being at the forefront of such a huge project was “the most exciting time” of her life.

Having worked her way up in a variety of roles at Quinnsworth and in the insurance sector before joining a medical distribution company, Tara believes that her practical experience gave her “a slightly different perspective” which she then grounded in theory, studying at night for a degree and masters in business from Cork Institute of Technology.

“You need a combination of the academic side too – I wouldn’t have become managing director without that, but the practical experience brings a common sense approach,” she says.

Having worked at different levels in sales and marketing she was in a perfect position to drive the new distributor. “The Irish market had a lot of medical and surgical distributors, some very big and others very small, with some particularly niche ones,” she explains. They looked at the market and decided that Healthcare 21 could serve a purpose as a one-stop-shop, but, she says, the business has evolved a lot since then.

Their customers include hospitals, primary and community care professionals such as occupational therapists, third party suppliers such as veterinary suppliers and even pharmacy suppliers. Originally Healthcare 21 supplied pharmacies direct, but they struggled in that market due to the very small volumes that were often required “one box of plasters, that kind of thing,” says Tara, and reoriented the business towards pharmacy suppliers.

“We’ve learned some expensive lessons – you see a market, ask can you make a success of it. If not, exit and find another route to it.”

Along the way Healthcare 21 has acquired a number of smaller Irish companies operating in slightly different spaces and this has also brought lessons. “I’ve learned that you need to know the business, and if you don’t you buy in the expertise, whether that be a consultant or an employee. From our history that is something we fell down on initially. Up to 50% of acquisitions fail and you have to recognise what is critical,” she explains.

The industry is approximately 30% female and Healthcare 21’s management team is a nice healthy 50:50, although that’s not deliberate, says Kearney.

“They got their positions through skill and expertise… but I have learned that you need to be flexible. Not just with females but for example women of a certain age and situation are going to need flexibility. The base and hours don’t matter if someone is giving what the company needs.”

Speaking to that, the company’s base is in Cork, with outposts in Cork city, Blarney and Ballincollig, while there is a satellite office in Dublin as well as its logistics centre. “Cork Airport is limiting in terms of flights and infrastructure so a Dublin base is necessary – you need an office there to bring clients to,” she explains, but she is happy that Cork is Healthcare 21’s home as well as her own.

She now works a couple of days a week in Dublin but says the travel is a personal choice she’s happy to make, pointing out that Dublin to Cork takes two and a half hours, but you could be the same time trying to get across Dublin.

Being involved in setting up the company was “lifechanging”, she says, but she’s not ready to rest on her laurels just yet, with a new office open in Leeds just last month and ambitious plans to double sales to €100 million by 2018.

“Every year you think ‘oh, we can sit back now’, but there’s always something going on!”

Within ten years, she would like to see Healthcare 21 as the go-to European distributor, because that service is currently fractured across countries. At the current rate of expansion, and with the enthusiasm Kearney brings to her role, that won’t be an impossible task.