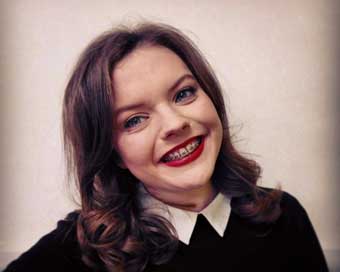 At just 19, Edel Browne has done quite a bit more than most. Not content to have won the BT Young Scientist of the Year individual award in 2013, she’s been named a Nissan Generation Next Ambassador, a global youth ambassador for America’s Amazing Teens, one of U Magazine’s 30 under 30, the Sunday Business Post’s 30 under 30, and is a member of the Digital Youth Council of Ireland and a participant on the STEMette Outbox Incubator in London.

It’s unusual for a second-year student of NUI Galway’s BSc in Biotechnology to have so many other irons in the fire, but since Browne’s idea, a medical advice designed to treat gait freezing for people with Parkinson’s disease, won the BT Young Scientist award, her path has been quite different to that of the average student.

“The idea came about because my brother is a Parkinson’s nurse in the hospital in Galway, and my neighbour has Parkinson’s as well. It was my project for the BT Young Scientist competition and we didn’t expect to do as well there as we did!”

A competitive streak – “I’m very stubborn” – was what pushed Browne into the competition in the first place. Her three older brothers had taken part in the Young Scientist and, while her school “didn’t really do it”, she decided she wanted to beat her brothers. And that she did.

We hear constantly about the lack of uptake of STEM subjects among young women, but Browne’s experience has been very positive. With the Leaving Cert in the news, the subject naturally comes up.

“I was always adamant that I wouldn’t do science”, she says, laughing, but a course she did at the Centre for Talented Youth in GMIT before starting secondary school gave her an interest.

“I didn’t get crazy high points, but I did get my first choice. I wasn’t in the 625 bracket but I aimed at the course I wanted and got it. I did all honours for my Leaving Cert – I found honours maths tough but I stuck at it. I think it taught me persistence.”

Her class in NUI Galway, Biotechnology, is predominantly female, and it’s clear she sees no barriers ahead, although how she manages her time, between study and running a groundbreaking biotech company, is a mystery.

“My college course is quite heavy, hours-wise, and I do spend a lot of time on Free Feet Medical, but it’s worth it.”

The product is at development stage, with the proof of concept being developed and tested at the moment. Marketing and promotion is being worked on, and along with Free Feet Medical’s COO Dr Aoife Kirk, and the company’s intern Evan Cannon, a biomedical engineering student at NUIG, she will launch a crowdfunding appeal in September to raise the €20,000 needed to develop a working prototype.

“It’s a labour of love. Our main goal at the moment is to develop the technology so we can make it available to the people that need it,” she says. “Every hour someone in the UK and Ireland is diagnosed with Parkinson’s.”

It’s too early for her to say if she envisages scaling the company or selling her technology to a bigger operator. For now the focus is on funding.

“If Fundit doesn’t work, we have to re-evaluate. I love what I’m doing and I want to stick at it. It is a hurdle, though – as a registered student it is hard to get funding from banks or investors.”

Investors have told her that the product needs to be at the next stage before it is of interest to them. “We have proof of concept but we need something more solid – it needs to be at a larger scale for investors.”

Corkwoman Tara Kearney has spearheaded the...