Businesses Are Unprepared for Brexit, According to InterTradeIreland 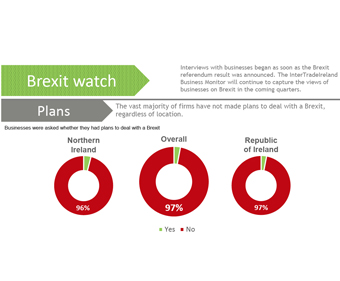 The latest quarterly (April – June 2016) Business Monitor Report from InterTradeIreland illustrates, against a backdrop of generally positive business performance, that the outcome of the referendum on Britain’s exit of the EU has caught a large majority of businesses offside. The report indicated that 97% of businesses in Ireland have no plan in place to deal with the consequences of the vote to ‘leave’, and that 92% of export businesses have no plan for this eventuality.

The negative implications of the uncertainty created by the referendum results in the marketplace are reflected by one in five (23%) of Irish firms reporting that they plan to decrease their level or speed of investment.

Aidan Gough, Strategy and Policy Director at InterTradeIreland said:  “It is evident in the responses to our latest Business Monitor that the outcome of the EU referendum has caught many businesses on the hop and introduced a large degree of uncertainty into the marketplace.

“Clearly businesses will need support to manage the ramifications of Brexit, particularly in the provision of timely and relevant information to assist them to adjust to any new trading relationships that emerge from Brexit negotiations.”

“In the short term, whilst companies will still trade under the same rules and regulations, we would encourage them to hedge any exposure their business may have to volatile movements in the Sterling / Euro exchange rate.”

“InterTradeIreland will constantly check the pulse of business needs and challenges through our Business Monitor so that we are in a position to respond quickly to business concerns and, if necessary, we will adjust our supports as new trading rules and regulations emerge. We encourage businesses to continue to exploit the cross-border market and take a planned approach to export development or supply chain management, particularly small and medium sized enterprises.’’

There is a marked variation between companies in Ireland and their counterparts in Northern Ireland in terms of the perceived Brexit impact on cross-border trade.  While almost three in five of businesses in Ireland (57%) felt that cross-border sales would decrease, only one in four Northern Irish firms felt they would be negatively impacted (25%).

Sectorally too, there are variations. The hospitality industry is expecting a sharp decline in cross-border sales with 4 out of 5 (84%) hospitality companies expecting a downturn. In comparison, around half of those in the manufacturing (49%), construction (52%) and servicing sectors (52%) foresee a sharp decline in their cross-border business.  Of those questioned, retailers are the most positive, with 15% anticipating an impact – this may be due to exchange rate volatility. When broken down by size of company, almost half of small companies (46%) anticipate a decrease in sales compared to a third of large (33%) and medium (36%) companies, meaning smaller businesses are feeling more vulnerable to this development than medium to larger enterprises.

There has also been a great deal of volatility in the importance of key issues facing businesses in comparison to Quarter 1, according to this InterTradeIreland research.  This quarter, the issues which have increased most in importance are exchange rates (up 14%), along with energy costs (up 8%), overhead costs (up 3%), a lack of skills (up 8%) and difficulty recruiting skills (increased by 10%).  Other issues, including cash flow, new competitors and access to finance, remain important to many firms but dropped significantly in importance this quarter, which may be a first sign of the changing economic landscape post-referendum.

Aidan added: “In terms of wider business performance, the picture remains generally positive. In Quarter 2, 93% of businesses in Ireland report that they were stable or growing.” He concluded: “We may see uncertainty continuing in forthcoming quarters while companies adjust to the changing realities. However, it is encouraging that almost two thirds (65%) of businesses on the island state that they have ambition to grow in the immediate future. Resilience in the face of adversity remains high and this can be seen across each of the sectors.

A copy of the 2016 Q2 InterTradeIreland Business Monitor Executive Summary can be viewed here.

Following the controversy where it was...

Can Women Really Have it All?

A new study by one of Ireland’s leading...