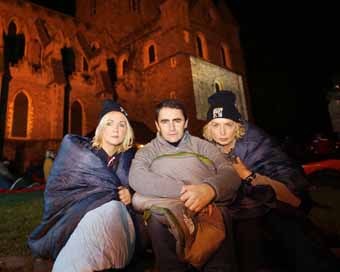 Focus Ireland is launching its annual ‘Shine A Light Night’ fundraiser that sees the business community swap their executive chairs for sleeping bags in a gesture of solidarity with people experiencing homelessness on Friday, 21st October 2016. On the same night, hundreds of workers in workplaces throughout Ireland are being asked to host sleep-ins or sleep-outs to raise vital funds.

There two ways for everyone to get involved in Shine a Light Night on Friday, 21st October:

– If you are a business leader, sign up for the ‘Business Leaders Sleep-Out’ at Christ Church Cathedral in Dublin or Cork’s historic City Gaol.

– If you are an employee, recruit your work colleagues to host a workplace group sleep-in out sleep-out.

The business leader sleep-out involves CEOs, Managing Directors and Senior Executives from companies big and small including PayPal, Three, Toyota, and more.   For 2016, workers are being asked to join the ranks of employees in Facebook and Google who will be staging sleep-ins to raise funds.

Shine A Light Night is Focus Ireland’s flagship corporate fundraising initiative. Since 2012 over €1.5 million has been raised to fund services to prevent and combat family homelessness. Over 300 business leaders have taken part in the sleep-out to date and last year over 30 workplaces around the country took part.

Commenting on the initiative, Ashley Balbirnie, CEO of Focus Ireland, said “This appeal comes as the number of families becoming homeless has nearly doubled since last year and one in three of those in emergency accommodation is a child. Focus Ireland is working to end homelessness and we do this every day of the year for at least one family. But, every day we save one family at least two more go through the trauma of losing their family home. We have been overwhelmed by the support business leaders and workers have given us over the years and we are urging as many as possible to get behind Shine a Light Night 2016.”

Learn more about Shine A Light Night, past participants and how to get involved by contacting Aoife Cooney on 01 881 5984 or cooneya@focusireland.ie or visit www.focusireland.ie.

Skills Needs of the Biopharma...