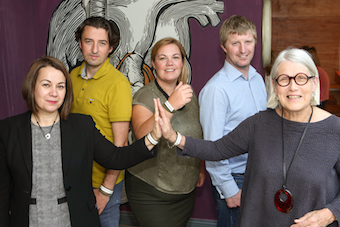 Athrú 2016, the two day conference held in 56 Central, Galway, from July 18th – 19th had a focus on empowering women in the culinary arts in Ireland and its core focus was echoed in the words of Darina Allen: “Talent has no gender”.

The two day conference and workshop was attended by close to 200 people and aims to establish a working Irish female chef database and mentoring system that would ensure that women are included on a 50/50 platform for judging, media and or to provide a female voice and point of view.

Athrú 2016 had a 50:50 ratio of male and female speakers with Colin Harmon from 3fe leading the key note address on Monday. Running a progressive business and kitchen in Dublin, Colin and 3fe Head Chef and Athrú 2016 founder Hilary O’Hagan Brennan, both expressed the need for “change to happen around traditional practices and the way of doing things in the culinary arts”. “It’s not about men and women, it is about how the way things are ran. The brigade kitchen system and the nature of kitchen does need to change”, explained Hilary.

“The conference aimed to raise the questions that need to be asked of the industry across the board. We had 50:50, male and female speakers. Athrú 2016 was about starting the conversation for change” said Jess Murphy of Kai Cafe, Galway and Athrú 2016.

“Athrú 2016 has been interesting and empowering to everybody, the industry needs to change throughout. The discussions, the speakers – the things the will come from this will be the catalyst for change. Starting the conversations that need to happen. Awareness from this has been incredible, the last two days on social media has been powerful.  It was a fully inclusive empowering event”, continued Murphy.

“It’s about changing the processes and work practices within the industry. Everybody wants more balance.  Mentoring will be key to bringing this industry on, you want people to be the best they can be and it doesn’t matter if they are a man or a woman” said Eanna Hassett Director of Food and Beverage at Ashford Castle, Mayo.

The latest research by Regus, the global...