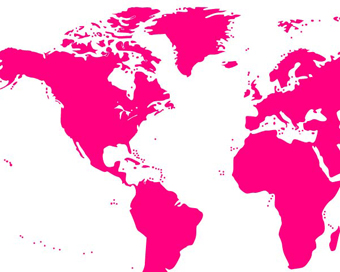 The Reputations Agency and Reputation Institute announced today that Ireland has been ranked in ninth position by the general public across the G8 nations, out of 55 countries surveyed in the annual Country RepTrak® 2016 study. This is the first time Ireland has entered the top ten ranking since first studied in 2009.  Sweden is the country with the world’s best reputation, according to the study.

Niamh Boyle, Managing Director at The Reputations Agency believes Ireland’s growing global reputation is very timely in a post Brexit uncertain economic international climate. “Reputation is increasingly important in a very competitive global marketplace.  Ireland’s positive reputation and top ten position is encouraging as we look to showcase our country to international visitors and investors. The Country RepTrak study shows that traditional measures such as size and economic output have little bearing on the general public’s emotional connection to a nation.”

“Being welcoming, safe and beautiful are the top three drivers of a country’s reputation, and nations with strong reputations such as Ireland are better positioned to welcome more tourists, increase exports, improve diplomacy and attract foreign direct investment, knowledge and talent” she said.

The Country RepTrak study measures the reputation of 55 countries based on levels of trust, esteem, admiration and good feeling, polling an online panel of more than 58,000 consumers representing the G8 countries. The study found that, in 2016, a country’s reputation was driven by perceptions based on three dimensions: effective government (37.1% weighting), appealing environment (36.0%), and advanced economy (26.9%). 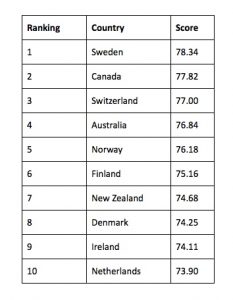 Sweden is ranked number one for the first time as it is perceived by the general public in G8 nations to be a great place for families with extensive parental leave and services.  In addition, it is seen to invest in sustainable and green initiatives, have good economic growth prospects, is a safe country for women and has a high level of transparency in its media sector.

Ireland improved its scores this year across each of the 17 attributes which drive a country’s reputation.  It improved scores most significantly in “Offers a favourable environment for doing business”, “Is run by an effective government” and “Has adopted progressive social and economic policies”.

As a result of having a good reputation, the top 10 ranked countries also gain a greater level of support from the general public.  In Ireland’s case, the country is ranked seventh in the list of countries that G8 consumers would like to visit, ninth for where the public would like to live and for where they’d like to organize or attend an event, and 10th place for the propensity to Buy products and services from that country.

Only fourteen countries hold a Strong score in this year’s study, while six hold Moderate scores, twenty nine hold Weak scores and six hold Poor scores.  Ireland was ranked ahead of the UK, Italy, Germany, Belgium, Spain, Portugal and France and the US.  Those countries with weak and poor reputations tend to be ones that are more closely associated with dictatorships or unstable political environments.

In 2016, safety became a key attribute that significantly impacted on reputation.  Belgium’s reputation dropped by four points in 2016 as the effect of the Brussels’ terrorist attack presented the city as less safe and had an umbrella effect on the whole country.  Similarly, Turkey’s reputation was impacted as a result of two major bombings in Istanbul, one in January and a second one in March.

Interestingly, despite the fact that France experienced a four point drop in the safety attribute, the country’s overall reputation and respondents’ willingness to visit and live in the country increased since 2015 as the emotional bond outweighed the negativity associated with safety concerns.

There has never been a female president of...

What is Leadership Competence...

I was thrilled when Sarah Palin was selected...