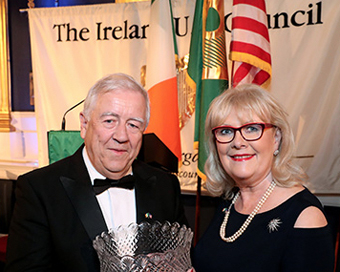 The Ireland-U.S. Council has presented its 2016 Lifetime Achievement Award to Marie O’Connor, Partner, PwC Ireland. The Award marks Marie’s notable and important achievements in building the business bonds between America and Ireland and was the centrepiece of the Council’s 2016 MidSummer Gala Dinner held last Friday, 24 June at Dublin Castle.

Marie O’Connor was the first woman to be admitted as a partner in Craig Gardner 30 years ago. She has specialised in audit and business advisory services to the financial services industry. She has displayed paralleled skills in bringing people together to further the interests of foreign direct investment from the USA to Ireland.

Marie led PwC’s Irish Funds and Asset Management practice for 12 years and was also a member of the PwC’s Global Asset Management leadership team. She has advised some of Dublin’s most successful investment fund structures and many leading U.S. asset management groups on establishing operations in Ireland.

She has been appointed to the boards of several high-profile State organisations by the Irish Government. These have included directorships at Dublin Airport Authority and IDA Ireland and membership of the Top Level Appointment Committee, among others.

She has been a board member of the Ireland-U.S. Council for many years, serves on the Funds Raising Advisory Committee for the Irish Cancer Society and the President’s Advisory Board at UCD. Marie leads the 30% Club in Ireland – which is a group of Chairs and CEOs committed to better gender balance at all levels of their organisations through voluntary actions. She is a Fellow of the Chartered Association of Certified Accountants, and is also qualified as a Barrister.

A Cork Woman Named “Most...

Cork wins big in Europe for leadership and...

Yesterday, at Government Buildings An...