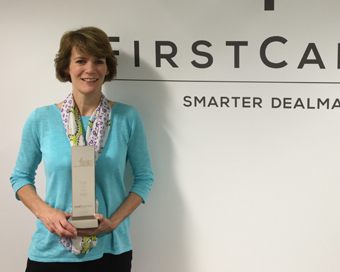 What has karate got to do with a glittering career in investment banking? Nothing really, unless you’re Hazel Moore – because that’s how the 21-year-old fledgling metallurgist came to enter the world of high finance.

“I’d love to say that my career was planned, but the reality is, it wasn’t,” quips award-winning Moore (48), chairman and co-founder of FirstCapital, an investment bank based in London and in California’s Silicon Valley. The bank has been successfully providing mergers and acquisitions, private equity and growth capital advice to high-growth technology companies since 1999 – deals range from €50 million to €500 million. “Opportunities arise and you take them,” says Moore, who studied Material Sciences and Metallurgy at university, and loved it.

However she also started karate at university – and loved that too, eventually becoming captain of the college Ladies Karate Club. When she got the chance to visit Japan with the club just after finishing university, she didn’t hesitate. “I went to Japan with the club and stayed at a university in Tokyo for about a month,” she recalls. She had been offered employment by the scientific research company for whom she had worked summers as a college student, but loved Asia so much she made a snap decision to stay on.

“I went to Hong Kong because it was still British-owned at the time, and easier to get a job there,” she explains. Many job applications later, she eventually landed a post as an equity analyst. “This meant I was working in the stock market in Hong Kong, looking at tech companies and investigating their investment potential. I fell into finance really, through a set of circumstances, but I really enjoyed it and stayed in Hong Kong for about five years. It was fantastic!”

It was 1990 and a good time to arrive: “The Chinese economy was taking off, the stock market was very strong with lots of US money coming in, and I had great opportunities to travel around Asia, analysing tech companies for the firm I worked for, and making recommendations for investors about what was a potential good investment opportunity and what was not.” It was challenging, interesting and enormous fun, she recalls now: “It was a great way  to spend your early 20s!”

In 1995 she returned to London and went to work in the City in a slightly different role, but didn’t enjoy it as much. A few years later, right at the start of the internet boom, she took a career break. “I was working with entrepreneurs who were setting up businesses and they needed to raise money. They didn’t know how to do that; they didn’t know how to put together an investment case, which was something I did know about.”

Not only did Hazel already have a tech background and know how to put together an investment case for a tech company she was able to talk in language the investors understood. Those skills became the platform for the establishment of FirstCapital in 1999, which she co-founded with her husband Jason. “I was seven-and-and-a-half months pregnant with my first child; I was huge,” laughs Moore, who now has three children – two sons aged 16 and 13, and a daughter aged eight.

Being heavily pregnant didn’t deter her, however, because she believes, there’s never a perfect time to start anything: “If you have something you want to do,  just do it!” However, it wasn’t all plain sailing – the 2000 internet dot com bust threw some big spokes into FirstCapital’s wheel: “It’s fair to say that the market conditions we were operating in were not what we had expected when we set up the business,” she recalls. Two or three lean years ensued, but, in hindsight, she says, the hard times were “very good for us”: “We had to focus very hard on the services we offered to our customers and make sure we were adding value and running the company properly in terms of cash flow, cost control and general management of the business.”

FirstCapital didn’t just survive, it thrived, opening its Silicon Valley branch in 2014. It’s being run by Irish-born David Smith, formerly of Enterprise Ireland. The key to their success, she believes, is its ‘SMART’ deal-making process, a business formula which focuses intensely on Strategic Positioning, Marketing, Access (to the right buyer), Rigorous Negotiations and Transaction Closure.

“Over the 16 years in business we have delivered an average 50% premium in value for our clients, which translates into millions of pounds for the companies we work with – our deal size is between $50 million and $500 million dollars,” says Hazel, the recipient of a series of dazzling awards, the latest of which, the First Women in Finance Award, was presented to her last month. Last year Hazel won the Women in Private Equity Award for Best Corporate Finance Advisor and in both 2013 and 2014 was identified as one of 100 Women to Watch in the Female FTSE Board Report.

She was surprised and delighted by the First Women in Finance Award: “I was shocked to win it because there were people there from the very large financial organisations,” she says, adding that the scarcity of women in the entrepreneur area in which she operates is frankly shocking. An award likes this, she says, showcases high-achieving professional women, which she believes, is crucial for girls and young women considering a career in the sector: “I’m a huge believer in role models. My catch phrase is that ‘You cannot be what you cannot see.’ Girls and young women need to be able to identify someone who has achieved something and ask  themselves ‘why can’t I do that too?’’

Which is why she was so thrilled to participate in the recent Inspirefest 2016 conference on science, technology and the arts in Dublin. An audience of over 2,000 people listened to a female-dominated programme of more than 50 leading international thinkers, including Hazel, who addressed a range of key science, tech and arts issues facing the world today. “I go to so many tech conferences and it’s really panel after  panel of mostly white males of a certain age, and often the same people,” she observes. “You think, ‘surely the conferences organisers could try a little harder’!”

“What the Inspirefest organisers have done is fantastic – Ann O’Dea has changed the ratio! With Inspirefest she said ‘here are all these fantastic women. Let’s showcase them and give them visibility to demonstrate the interesting roles for women that are possible in the tech community and the potential for women to achieved success.’ It’s all about seizing the day!”

And who, one asks, could know this better!