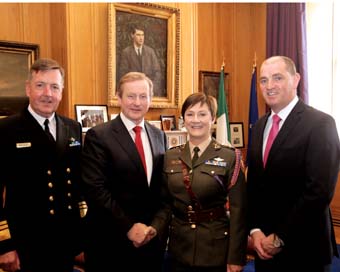 A native of Galway City, Col O’Brien graduated from University College Galway with B.Sc. and H.Dip. Ed., before being awarded a Cadetship in the Defence Forces in 1981. On Commissioning in 1983 she was posted as an Infantry Officer, to the 4th infantry Battalion, Cork, returning to the Cadet School some years later as an Instructor. Since then Col O’Brien has held many different appointments in operations, training and strategic planning. At home she has served in Cork, Defence Forces Headquarters, Eastern Brigade HQ, Dundalk and the Military College.

In 2011 she became the first female to be promoted to the rank of Lieutenant Colonel and in 2012 became the first female Infantry Battalion Commander when she was appointed Officer Commanding 27 Infantry Battalion in Dundalk. For the last two years she has held an appointment in the Operations Branch of Defence Forces Headquarters where she was the senior staff officer responsible for EU and NATO/PfP engagement.

She has extensive overseas service. Her first two deployments were to Lebanon (UNIFIL). She has also served in Western Sahara (MINURSO) and East Timor (UNTAET). She was seconded to the Organisation for Security and Cooperation in Europe (OSCE) in Sarajevo (BiH) for eighteen months. In 2009 she became the first female officer to serve as a Deputy Commanding Officer of an Infantry Battalion in CHAD (MINURCAT). Her most recent deployment was as Chief of Operations Planning in a multi-national Sector HQ in Lebanon.

She has also completed a Post Graduate Diploma in IT from UCC and holds a first class Masters Degree in Leadership, Management and Defence Studies (NUIM). Col O’Brien takes up the appointment of Director of Communications and Information Services.

The Ireland-U.S. Council has presented its...