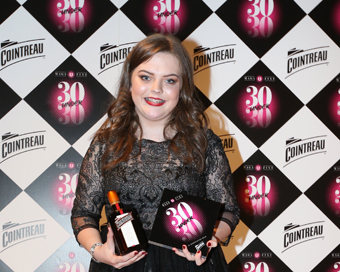 Edel Browne has been announced as the winner of U Magazine’s ‘30 Under 30’ in the contribution to STEM and was named as one of the Sunday Business Post’s ‘30 Under 30’ for Technology.

Nineteen-year-old Edel from Athenry, Co. Galway is in second year of a BSc in Biotechnology at NUI Galway. She is the founder and CEO of Free Feet Medical, a multi-award winning medical device designed to treat gait freezing for people with Parkinson’s disease and is the Student Entrepreneur in Residence in Blackstone LaunchPad at NUI Galway. She is a past participant on the STEMette’s Outbox Incubator in London, a founding member of the Digital Youth Council in Ireland, and a global youth ambassador for AAT (America’s Amazing Teens).

Edel has also secured her place as one of 11 Nissan Generation Next ambassadors after a month of public voting. A total of 81,000 votes were cast for 20 finalists, with the top seven automatically qualifying to join the ambassador programme. The Nissan Generation Next is about helping the best and brightest on the road to success and she plans to use her new Nissan to travel to Parkinson’s Associations across Ireland to present her work and to conduct market research to improve Free Feet Medical’s product so that she can bring it to market.

Speaking on the awards Edel said: “I’m absolutely thrilled to be recognised for my work in STEM promotion and Entrepreneurship by both the Sunday Business Post and U Magazine. It’s fantastic for hard work and dedication to be recognised, on a national and international scale, among such inspiring peers. Becoming a #NissanGenNext Ambassador also means that I have an outstanding opportunity to represent both the brand, the University, and it’s an excellent opportunity for Free Feet.”

Mary Carty, Executive Director of Blackstone LaunchPad at NUI Galway, said: “I am absolutely thrilled for Edel, and delighted to see that her hard work and commitment is being recognised. I am looking forward to seeing what the future brings for Edel and Free Feet Medical.”

Edel has been chosen as one of 30 Three Dot Dash Global Teen Leaders for 2016 and one of 200 ‘Founders of the Future’. She was listed among the top 38 Women in Tech in Ireland in 2015, named one to watch by The Irish Times, and was awarded the Best Individual Award at the BT Young Scientist competition in 2013.

Are you a female-led start up with scale and...