A Cork Woman Named “Most Outstanding” in Europe 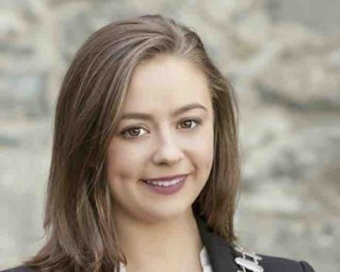 JCI Cork Past President Mary Kate Portley has been awarded as Europe’s Most Outstanding Local President of Junior Chamber International for her time as President of the Cork Branch. The award is given to the individual who shows their dedication to JCI and its members.

In 2015 Mary Kate became President of JCI Cork and transformed the branch through her innovation and leadership. Under Mary Kate’s reign the branch increased Membership, partnerships and sponsorship leading to growth and positive impact to the city and businesses of Cork. This growth in the organisation locally led to Cork winning three National Awards in 2015, qualifying her for the shortlist and eventual victory of the European title.

Mary Kate commented; “It is very surreal to see your name in lights in front of 2,000 people in Finland! It really is amazing to think that all the effort and commitment we gave to Cork is something that was acknowledged and recognised at European level. To think that there are 935 Local Organisations in Europe, each with their own Local President, and to see Cork come out on top is unbelievable”

A native of Model Farm Road, Mary-Kate is a past pupil of Mount Mercy College and graduate of Law and French in UCC. Now working in Accenture Management Consulting based in Dublin, she is in their Health and Public Service practice, her current role being in National Policing and Security.

Current President of JCI Cork, Éabha O’Leary Fitzpatrick, was named in the top five new JCI Members in Europe. Éabha has continued the incredible growth and positive impact in Cork city, making Cork a great place in which to live, work and visit.

For more information on JCI in Ireland, log on to www.jciireland.ie.

The Ireland-U.S. Council has presented its...