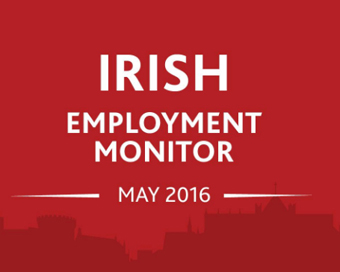 The availability of professional job opportunities in May 2016 (12,056) fell slightly, by 1%, when compared to the previous month (12,203) according to the Morgan McKinley Irish Employment Monitor.

Some of the main findings included:

– In Finance, risk and insurance professionals are in high demand. Hiring within the Funds sector remains static due to uncertain international environment and possible Brexit.

– Recruitment within IT overall remains buoyant across both permanent and contract roles. Big data and security roles have seen intense hiring activity this quarter.

– Multilingual professionals continue to be sought after. Employers are increasingly using technology such as Skype and Sonru to speed up recruitment campaigns.

– There is strong demand regionally for both property and employment lawyers.

– Overall the hiring market in Q2 can be described as cautious, with companies unwilling to make recruitment decisions at the same pace as last year. This is due to a combination of both domestic and international factors, including Brexit.

Ronan Hill, Operations Director, Morgan McKinley Ireland said: “Global uncertainty and concerns over the possible impact of Brexit are impacting the pace of recruitment, creating a level of inertia in the hiring market when compared to the same time last year. In particular, the prospect of Britain leaving the EU, however slight at this juncture, has undoubtedly had a dampening effect on hiring intentions and patterns over the last 4- 6 weeks.”

He continues: “Conversely, we anticipate Ireland could be in for a significant jobs boost in the event of a “remain” vote, with companies experiencing a renewed sense of confidence in resource planning. In May, big data and security roles were the primary drivers of the IT sector. Talent shortages are still a concern within the industry. We have seen permanent roles migrating to contract status due to time pressure and candidate shortages.”

TEDxDrogheda was officially launched by...