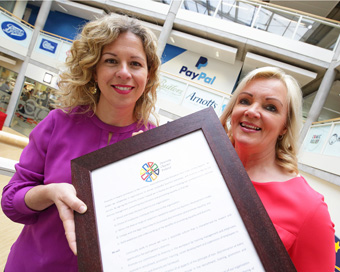 PayPal, with its European HQ based in Ireland, has signed the Diversity Charter Ireland as part of its Diversity Inclusion Week, running from 13th to 17th June.

The charter – a seven-point plan – is supported by the European Commission and reflects PayPal’s commitment to prevent discrimination and promote equality in the organisation. It was signed by Raffaella Bonomonte, Director of PayPal in Ireland.

Louise Phelan, PayPal’s Vice President of Global Operations for Europe, the Middle East and Africa, and WMB Businesswoman Award 2013 winner, said: “It’s a powerful statement of our commitment to ensuring that we support a culture that is characterised by respect and appreciation for each individual’s diversity. Inclusion is one of our cultural values here at PayPal; it’s about respecting and valuing uniqueness and diversity of thought.”

As part of Diversity Inclusion week, the pride flag will fly outside PayPal’s centres of excellence in Dublin and Dundalk throughout the month of June and the company will formally launch its LGBT network, PayPal Pride. In its commitment to promote diversity within the company and across Ireland, PayPal has been a strong supporter of the Dublin Pride Parade for the last two years. This year, PayPal will be an official silver sponsor of the event, with a float in the parade promoting equality and inclusion.

Louise Phelan added: “We’re delighted to be an official Silver Sponsor of the Dublin LGBTQ Pride Parade this year. We have a fantastic, colourful float organised and I look forward to spending 25th June in Dublin city centre with my teammates promoting a message of equality, diversity and inclusion.”

“At PayPal, we know that ideas are richer and execution is stronger when everyone feels included and that is what helps us grow as a company. I believe that when you are yourself, you can perform to your maximum potential. That’s why we invest in programmes like our Diversity and Inclusion workshops; it is why we support women in business both in PayPal and our industry as a whole; why we advocated for a ‘yes’ vote in the Marriage Equality Referendum; and why we support the Dublin Pride Parade,” she concluded.

“As a signatory to the Employment Charter, we make a special effort to include people from the live register in our recruitment. PayPal is an extremely diverse workplace because we support our customers and merchants through 12 languages from our centres of excellence in Dublin and Dundalk. I’m really proud that we were this year crowned ‘Diversity Champion 2016’ as it is recognition of PayPal Ireland’s leadership when it comes to diversity and inclusion.”

(Pictured L-R: Raffaella Bonomonte, Director of PayPal in Ireland is pictured with Louise Phelan, Vice President of Global Operations for Europe, the Middle East and Africa at the signing of the Diversity Charter Ireland.)